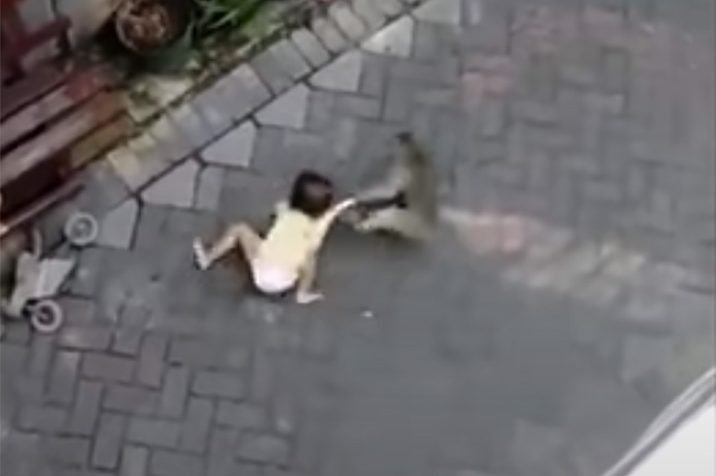 A stunt monkey riding a tiny bicycle in Indonesia suddenly turned on a toddler watching the performance, dragging the child across the cobblestones in a frightening incident that was caught on video.

The attack happened in Surabaya, Indonesia on Saturday, according to Jasa Supanji, who sent video of the encounter to Storyful.

The video, which is shot from above the street, shows the monkey zooming down the narrow alley on a small motorized bicycle. The monkey gets close to a bench where several people, including children, are sitting. It then ditches the bike, grabs the toddler off the bench and drags him down the road for several feet before letting him go.

The child was frightened but uninjured aside from a few scratches to the face, the Indozone news site reports.

Supanji said the child appeared to be fine after the monkey let him go.

People had gathered in the area to watch a “monkey mask,” a form of “traditional entertainment” involving a monkey and a handler playing music, according to the Indozone report.

Many street performers put the monkeys in human clothes and force them to wear doll masks for the performances.

PETA and other animal rights groups have condemned monkey masks as cruel and inhumane in the past.

Jakarta, Indonesia’s capital city, banned monkey masks in 2013. However, the masks have not been stamped out across the country.

The monkey in the bike incident did not appear to be wearing a mask.

Supanji told Indozone that the monkey handler beat the animal and put it in a box after the attack.