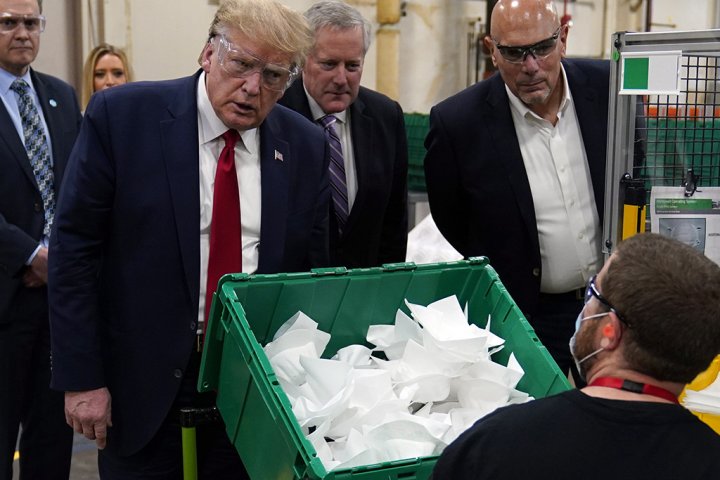 U.S. President Donald Trump opted not to wear a protective mask to help mitigate the spread of COVID-19 during a tour of the Honeywell International factory in Arizona on Tuesday, despite face coverings being recommended by the U.S. Centers for Disease Control and Prevention (CDC).

A video of Trump’s personal tour of the facility captured the president giving a thumbs-up to the camera while Guns N’ Roses‘ 1991 cover of the rock anthem Live and Let Die played in the background.

Though a sign in the factory indicated that everyone is currently required to wear a mask, White House officials claimed Honeywell said Trump and other visitors did not need to wear masks, according to CNBC.

Honeywell CEO Darius Adamczyk and White House chief of staff Mark Meadows can also be seen without masks in footage of the tour.

N95 respirators have been tested and proven to protect individuals from at least 95 per cent of airborne particles by filtering the air, according to the CDC.

Masks, both medical and non-medical, can be effective in preventing the spread of COVID-19, according to Dr. Theresa Tam, Canada’s chief public health officer.

People who don’t have symptoms can wear non-medical masks when in public as “an additional measure” to protect other people, Tam said in a news conference last month.

Live and Let Die was made famous by Paul McCartney and Wings in 1973 when it was released as the theme for the much-loved James Bond film of the same name.

Following Trump’s tour, many took to social media to point out that Trump did not wear a mask while millions of people are infected with COVID-19 and many are dying from it.