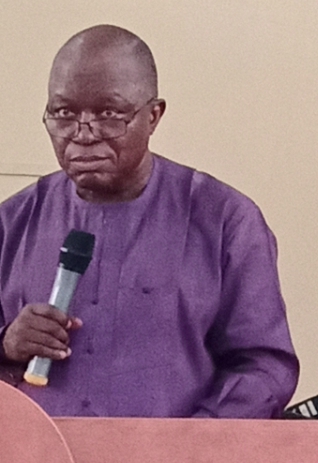 Chief Adeniyi Akintola SAN, the man who chaired the Egbe Amofin committee that produced former General Secretary of the Nigerian Bar Association(NBA), Dele Adesina SAN as the South West presidential candidate for NBA 2020 elections has come out to explain the process and procedure the committee went through to produce the winner.

Akintola, one of the current leaders of the bar in the South West denied that the process was skewed to favour any particular candidate, saying such allegations constituted a serious insult to his person and that it impugned his integrity as a senior lawyer.

Chief Akintola made the revelations in an interview he granted the Judicial Editor of The Nation newspapers, Mr John Unachukwu and published in the newspaper on Tuesday.

Reacting to the question, whether  his committee deliberately favoured Adesina, Akintola replied: “Nobody has come out to us to say that he is rejecting the adoption of Egbe Amofin. What Egbe did was very transparent, every one of the would be aspirant came before the Egbe Amofin at the meeting  to express their desire and I remember that day there were four of them that came forward, they were all unanimous in electing me to chair the committee, nobody raised any form of objection there”.

“I was seated in the crowd when I was invited to the high table and all of them expressed their confidence in me and the committee. We had a criteria for the assignment and when one of them requested for the criteria, I directed the Secretary  Dr. Akintayo to forward it to him;

The issue of zoning was to bring in some trouble but that was the first thing we tackled by adopting the template . Having done that, I remember my brother silks, Dele Adesina ( SAN), Dr.  Tunde Ajibade (SAN), Aare Olumuyiwa Akinboro ( SAN) and Awoniyi. Incidentally, the four of them that came forward that day were going to contest for the presidency of the Bar;

Two of them were from Ekiti State,  while the other two were from Osun State. Our leader, Chief Wole Olanipekun (SAN) didn’t manipulate anybody, he never participated in selecting anybody. I said ok let us select all the Chairmen of the branches to do this job. So the chairmen of the branches were brought out and were mandated to sit under me and screen the candidates;

The chairmen were mandated to go back to go back to their various branches and discuss the candidates in their branches, get feedback  and then bring the feedback to the secretariat of Egbe Amofin”.

Chief Akintola insisted that the committee had three meetings before it set the criteria that the candidate that would emerge must possess. Such candidate, according to him must have a good practice,  must not just a Bar man, but must also be a legal practitioner in the real sense of the word; must have a viable means of income, must be honest, must not have been convicted of any crime, you must not have a pending case before the disciplinary committee of the Bar. Must not be facing criminal trial in any court anywhere in the world.

Chief Akintola further emphasized that the candidate’s level of practice must be very good and the candidate must have participated actively on bar activities whether at local, national and international level. “Again such a contestant must have geographical spread because Egbe alone cannot make anybody president of the Bar. That was the mandate we gave to the chairmen, we also urged them  to contact their counterparts in other zones”, he said.

The Senior lawyer confirmed that the committee got feedback from other parts of the country. “For instance, the chairman in Abeokuta can speak with his counterpart in Zamfara State on who he will prefer to be our President and get the feed back to the committee”.

He continued: “That was what we used,  so when one of them demanded for the criteria we gave it to him and we went to voting and because of this template which we adopted, we now said let us have Ondo /Ekiti first  in this new arrangement. So we presented that to Muyiwa Akinboro (SAN) and Awoniyi and they agreed to step down. We now agreed and said, now that justice is coming to Egbe Amofin let us work together so that next time another zone will produce and not that one state will  produce and produce again; Mr. Akinboro formally withdrew from the contest and commended us;

So there was no manipulation of any kind, as a matter of fact I didn’t vote as the chairman. It was overwhelming in favour of the person we adopted. It was 27 votes against four votes. And that was without my vote. I remained neutral in the whole process nobody manipulated anybody contrary to the insinuations being peddled here and there;

He however said he has taken all the attacks in his stride. “We are not moved, we are talking to ourselves, all the contestants are our brothers, they are our  own. When we were discussing the idea of constituting the committee of chairmen to conduct the screening exercise, other would be contestants from other zones were with us, they were all in Ibadan. Different contestants from Onitsha, from Lagos, from Warri and other parts of the country were all with us at the meeting. And nobody raised eyebrows, Many Senior Advocates of Nigeria from the South west were there, it was very unprecedented because none of our meetings had commanded such a high level of attendance .

You should also READ  Coronavirus: NBA in talks with Disney to resume season at site in Florida

The meeting  was attended by the former Chairman, Body of Benchers, Chief Ajomale, former  President of the NBA and Bencher Mrs. Pricilla Kuye, Pa Emmanuel Abiodun, all of them were there so I don’t know where this nonsense emanated from that the meeting was manipulated, because of who?

We had about 31 branch chairmen that took part in the screening exercise, who applied our criteria. Everybody in the legal profession who knows my relationship with Deacon Dele Adesina will know that we are not the best of friends. In fact in Dele’s acceptance speech he stated that many people asked why he accepted my chairmanship of the committee. Though we had our differences,  I have pushed everything behind and moved on;

If for  anything, Tunde Ajibade and Muyiwa Akinboro are closer to me than Dele Adesina, they have been my aburo here in Ibadan. Akinboro is from my zone here in Ibadan/ Osun to which I belong. Tunde Ajibades father was my benefactor, he was one of the seniors that trained me here, I have nothing in common with Dele at all. So for anybody to say that we skewed it in favour of Dele is an insult to me”, he concluded.