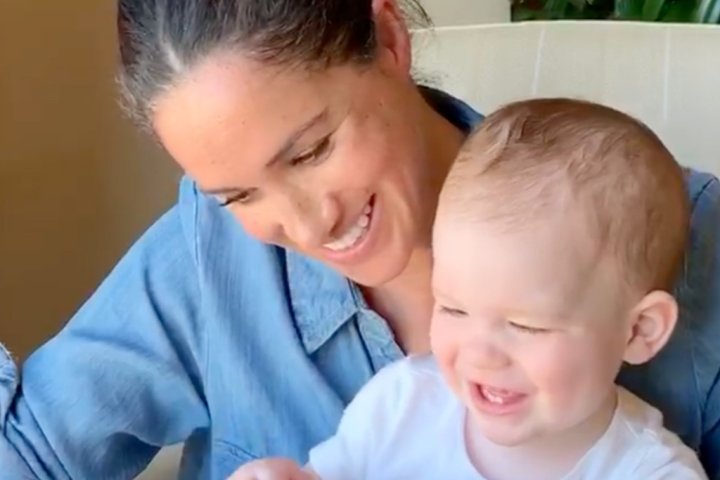 As Prince Harry and Meghan Markle settle into their more “normal” (non-royal) lives, their fans have eagerly awaited seeing their son Archie again.

To commemorate his first birthday on Wednesday, the couple shared a never-before-seen video of the baby boy — and he’s looking more like his father every day.

In the video, posted by charitable organization Save With Stories, Markle holds her son on her lap as they flip through a children’s book.

“Read by Meghan, The Duchess of Sussex (with Harry, The Duke of Sussex behind the camera) to their son Archie for his 1st Birthday,” the Instagram caption reads. “Happy Birthday, Archie!”

The caption goes on to say that the book Duck! Rabbit! by the Amy Krouse Rosenthal Foundation is one of Archie’s favourite books.

The Duke and Duchess of Cambridge, as well as Prince Charles and Camilla, took to their social media to wish Archie a happy birthday.

On the evening of Dec. 31, the couple posted a year-end video on their former official Instagram account, which rounded up some of their best photos of 2019.

At the end of the video montage, one of the very last photos shows Prince Harry holding baby Archie. According to royal reporter Omid Scobie, it’s a snapshot from their vacation in Canada over the holidays.

In the photo, the new dad holds his seven-month-old son against the backdrop of a lake and mountain range.

The young royal wears a pom-pom hat and brown Ugg boots. The boots were given to Markle and Prince Harry by Australia’s Sir Peter Cosgrove and his wife while they were in Australia in 2018.

The Instagram video, set to Coldplay’s 2002 song Clocks, includes various other photos from throughout the year, including one from the Sussexes’ family trip to Africa as well as photographs from various outings with the couple’s individual patronages.