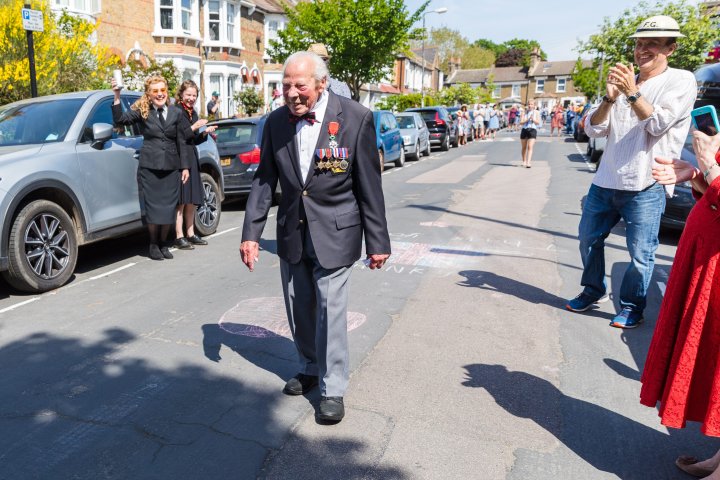 Europe was marking the 75th anniversary of the surrender of Nazi Germany to Allied forces following six years of war in a low-key fashion Friday due to coronavirus lockdown restrictions across the continent.

The big celebrations planned have been either cancelled or scaled back dramatically and people across Europe have been asked to mark the moment in private.

There will be no mass gatherings, no hugging or kissing, but that day of liberation is being remembered from Belfast to Berlin. For the few surviving World War II veterans, many living in nursing homes under virus lockdowns, it’s a particularly difficult time.

Up and down the U.K., people have been getting into the spirit of V-E Day, which this year has been designated as a public holiday.

Many are dressing up in 1940s attire, while bunting has been displayed outside homes, including at 10 Downing Street in London that houses the prime minister’s office. People are also being encouraged to go out onto their doorsteps to sing Dame Vera Lynn’s iconic wartime anthem, “We’ll Meet Again” — which has added resonance now as families and friends are separated by coronavirus lockdowns.

People gathered in a socially distanced way on the hills of London to marvel at the Royal Air Force’s Red Arrows. The nine planes flew in formation above the River Thames and let loose their red, white and blue smoke to mark the colours of the Union Jack.

You should also READ  U.K. has spent 4.4 billion pounds so far on Brexit: report

Prime Minister Boris Johnson, who lit a candle Thursday evening by the grave of the Unknown Warrior in Westminster Abbey in remembrance of those who gave their lives, wrote to veterans, describing them as “the greatest generation of Britons who ever lived.”

Prince Charles and his wife, the Duchess of Cornwall, led the country in a two-minute silence at the war memorial on the grounds of Balmoral Castle in Scotland. Charles laid a wreath of poppies on behalf of the nation. At the U.K.’s main memorial on Whitehall in central London, traffic ground to a halt as people observed the silence.

The “Victory in Europe” speech by Britain’s wartime prime minister, Winston Churchill, was broadcast on television. Queen Elizabeth II, at 94 a World War II veteran herself, will speak to the nation at 9 p.m., the exact time that her father, King George VI, addressed Britons 75 years ago.

Unlike Britain, Victory Day is a traditional public holiday in France, but it was clearly far more sombre this year with the country under strict lockdown to counter the spread of the coronavirus.

Small ceremonies were allowed at local memorials as the government granted an exception to restrictions following requests from mayors and veterans.