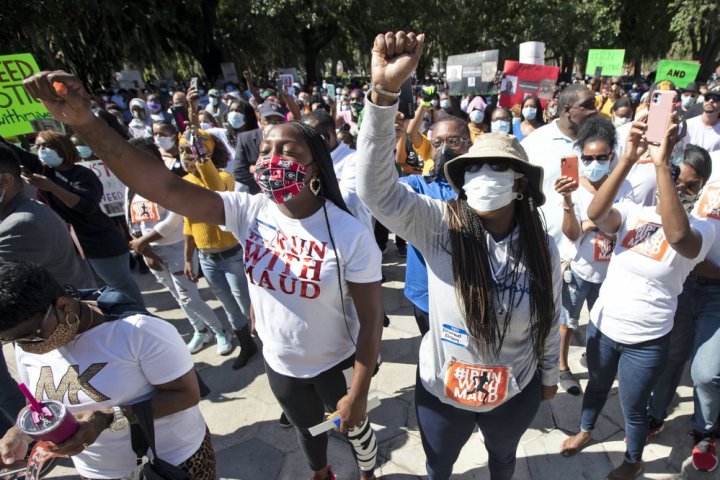 Many people saw more than the last moments of Ahmaud Arbery’s life when a video emerged this week of white men armed with guns confronting the black man, a struggle with punches thrown, three shots fired and Arbery collapsing dead.

The Feb. 23 shooting in coastal Georgia is drawing comparisons to a much darker period of U.S. history — when extrajudicial killings of black people, almost exclusively at the hands of white male vigilantes, inflicted racial terror on African Americans. It frequently happened with law enforcement complicity or feigned ignorance.

The footage of Arbery’s death was not the only thing that rattled the nation’s conscience. It took more than two months for his pursuers — who told police they suspected he was a burglar — to be arrested and taken into custody. That is fueling calls for the resignation of local authorities who initially investigated the case and reforms of Georgia’s criminal justice system.

“The modern-day lynching of Mr. Arbery is yet another reminder of the vile and wicked racism that persists in parts of our country,” said the Rev. James Woodall, state president of the Georgia NAACP. “The slothfulness and inaction of the judicial system, in this case, is a gross testament to the blatant white racial privileges that permeates throughout our country and our institutions.”

The case appeared frozen as it was handled by police in the small city of Brunswick.

After the video emerged on social media this week, the Georgia Bureau of Investigation took one day after launching its probe Wednesday to arrest Gregory McMichael, 64, and his son, Travis McMichael, 34. They are jailed on murder and aggravated assault charges and did not have lawyers as of Friday who could comment on their behalf.

Several hundred people crowded outside the Glynn County Courthouse on Friday to mark what would have been Arbery’s 26th birthday, with many saying it’s too soon to celebrate because the case must still go before a grand jury that will decide whether to indict the McMichaels.

Arbery’s killing reminds some of Emmett Till, a black teen from Chicago who was kidnapped in 1955 in Mississippi, lynched and dumped in a river after he was falsely accused of whistling at a white woman. An all-white jury acquitted the white men accused of killing Till, who was 14. His death helped fuel the civil rights movement and brought about the eventual passage of federal civil rights protections.

During Friday’s protest, demonstrator Anthony Johnson said he sees echoes of Till and others. Arbery “died because he was black like the rest of them did. For no reason,” Johnson said.

Arbery’s mother, Wanda Cooper Jones, has said she thinks her son, a former high school football player, was jogging for exercise before he was killed.

Gregory and Travis McMichael told police they suspected Arbery was the same man recorded by a security camera committing a break-in. When they saw Arbery running on a Sunday afternoon, the McMichaels grabbed guns, got into a pickup truck and pursued him.

Video footage shows a runner grappling with a man armed with a shotgun. Shots are fired and the runner staggers and falls. A Georgia Bureau of Investigation statement said the McMichaels confronted Arbery with two firearms and that Travis McMichael fatally shot Arbery.