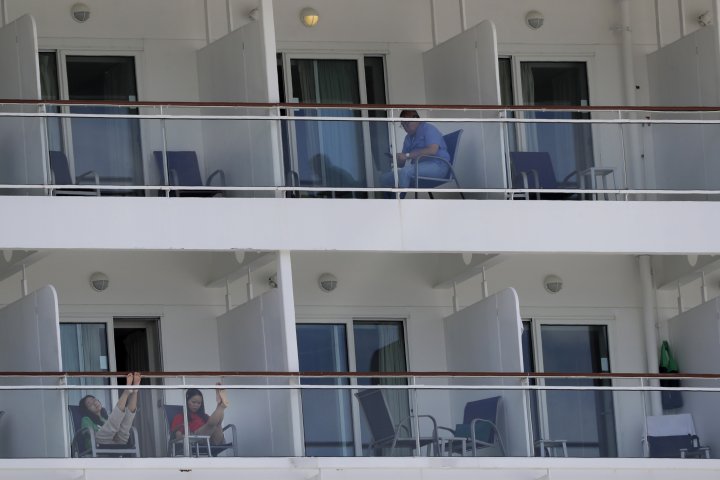 Carolina Vasquez lost track of days and nights, unable to see the sunlight while stuck for two weeks in a windowless cruise ship cabin as a fever took hold of her body.

On the worst night of her encounter with COVID-19, the Chilean woman, a line cook on the Greg Mortimer ship, summoned the strength to take a cold shower fearing the worst: losing consciousness while isolated from others.

Vasquez, 36, and tens of thousands of other crew members have been trapped for weeks aboard dozens of cruise ships around the world — long after governments and cruise lines negotiated their passengers’ disembarkation. Some have gotten ill and died; others have survived but are no longer getting paid.

Both national and local governments have stopped crews from disembarking in order to prevent new cases of COVID-19 in their territories. Some of the ships, including 20 in U.S. waters, have seen infections and deaths among the crew. But most ships have had no confirmed cases.

“I never thought this would turn into a tragic and terrifying horror story,” Vasquez told The Associated Press in an interview through a cellphone app from the Greg Mortimer, an Antarctic cruise ship floating off Uruguay. Thirty-six crew members have fallen ill on the ship.

The Centers for Disease Control and Prevention said last month that about 80,000 crew members remained on board ships off the U.S. coast after most passengers had disembarked. The Coast Guard said Friday that there were still 70,000 crew members in 102 ships either anchored near or at U.S. ports or underway in U.S. waters.

The total number of crew members stranded worldwide was not immediately available. But thousands more are trapped on ships outside the U.S., including in Uruguay and the Manila Bay, where 16 cruise ships are waiting to test about 5,000 crew members before they will be allowed to disembark.

As coronavirus cases and deaths have risen worldwide, the CDC and health officials in other countries have expanded the list of conditions that must be met before crews may disembark.

Cruise companies must take each crew member straight home via charter plane or private car without using rental vehicles or taxis. Complicating that mission, the CDC requires company executives to agree to criminal penalties if crew members fail to obey health authorities’ orders to steer clear of public transportation and restaurants on their way home.

“The criminal penalties gave us (and our lawyers) pause,” Royal Caribbean International President and CEO Michael Bayley wrote in a letter to crew members earlier this week, but he added that company executives ultimately agreed to sign.

Melinda Mann, 25, a youth program manager for Holland America, spent more than 50 days without stepping on dry land before finally disembarking from the Koningsdam ship Friday in Los Angeles. Before she was transferred to the Koningsdam, she tried to walk off another ship with other U.S. crew members last week but the ship’s security guards stopped them.