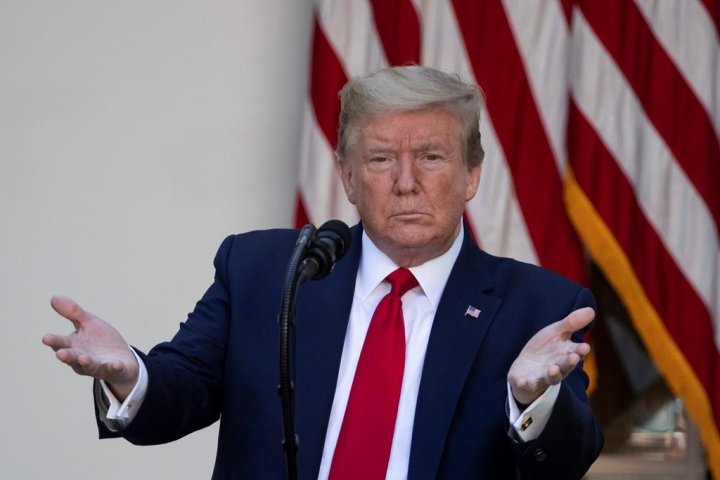 As he encouraged the country to “reopen,” President Donald Trump confronted cases of the coronavirus in the White House itself on Monday, spotlighting the challenge he faces in instilling confidence in a nation still reeling from the pandemic.

In a potent new symbol of the risk, Trump addressed a Rose Garden audience filled with mask-wearing administration officials. That was after two known cases of COVID-19 among staffers in one of the most-protected complexes in America sent three of the nation’s top medical experts into quarantine and Vice-President Mike Pence into “self-isolation.”

Trump himself, not wearing a mask, was emphasizing to the American people the steps being taken to ensure their safety — in hopes that will coax them to resume normal activities.

At one point Monday, he declared “We have met the moment, and we have prevailed.” Trump later clarified he was only referring to `prevailing’ in connection to testing for the virus. Yet that contention, too, is widely challenged.

His upbeat message in the sunny White House Rose Garden was undercut by the sight of all the officials in face masks, a result of the positive cases at the White House itself and new protective measures implemented to keep Trump safe.

A memo to staff Monday directed “everyone who enters the West Wing to wear a mask or facial covering.” Staff will be allowed to remove their face coverings if they sit at least six feet apart from their colleagues. The directive apparently doesn’t apply to the president.

At Trump’s Monday briefing, meant to highlight the availability of COVID-19 testing that governors in both parties have said is essential for their reopening plans, many White House aides, including senior adviser Jared Kushner, appeared in public for the first time wearing face coverings.

Trump insisted that any American who wants a test for the virus can get one, even though experts say there is no capacity for testing on that scale.

Only on Monday did the administration believe it had enough tests to mount a nationwide testing campaign to address significant death rates in nursing homes and other senior care facilities. On a call with governors, Pence and Dr. Deborah Birx, the White House co-ordinator for the virus response, recommended that every nursing home occupant and staffer be tested for COVID-19 in the next two weeks, with vigilant monitoring going forward, especially of staff.

Pence led the weekly call with governors from an isolated room, after his press secretary tested positive Friday. Birx and other staffers participated as usual from a conference room in the Situation Room, Pence said, explaining the “slightly different circumstance.”

“We are taking the appropriate countermeasures to protect the president’s health,” Pence added, according to a recording obtained by the AP. The White House was moving to daily testing of some staff members to detect the disease.