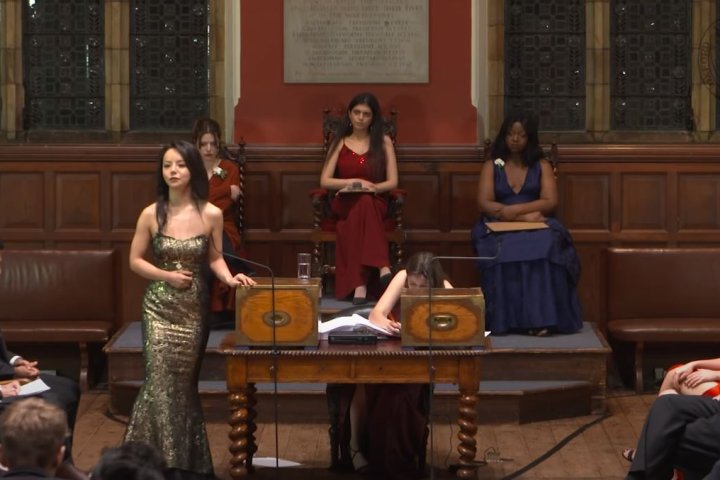 For Anastasia Lin, the breakthrough came shortly after her speech at Oxford University in early February.

The 30-year-old Chinese-Canadian actress and beauty pageant winner had been speaking for years about the Chinese Communist Party’s worldwide influence operations, and its human rights abuses. But she had never received vocal support from her community, she says, until her widely shared speech struck a nerve amidst Beijing’s coronavirus response.

Born in Hunan, China, her family immigrated to Vancouver, B.C. when she was 13.

When she started to take acting jobs, almost by accident, some of the roles drew her into a community of Chinese dissidents and human rights advocates. She describes a process of “awakening” to the indoctrination of her education in China, where citizens are taught to view the West as an enemy and the Communist Party as the sole guardian of Chinese people worldwide.

Lin became so vocal in her criticism of the Communist Party’s influence tactics in Chinese immigrant communities, that after she was crowned Miss World Canada in 2015, and she sought a visa to compete for the world title in China, authorities there denied her application.

But Lin kept speaking out. And in 2018, the MacDonald-Laurier Institute named Lin as the Ottawa think-tank’s new ambassador on Canada-China policy.

For the University of Toronto graduate, speaking about China’s politics came at a personal cost.

She says her family has been harassed and called “anti-Chinese.” Even more stunning, for Lin, her mother in Vancouver, informed her that Chinese national security agents had questioned a family business colleague in China.

“My mom told me her colleague was visited by Chinese Secret police and they asked about me, in recent years,” Lin said.

The Chinese consulate in Ottawa has not responded to a request for comment on the allegations in this story.

Since winning the Miss World Canada title in 2015, Lin has come to the belief ⁠— through quiet conversations among trusted friends and colleagues ⁠— that most Chinese-Canadians are opposed to the Chinese Communist Party’s so-called “United Front” networks that seek to control immigrant groups. But in her words, many Chinese-heritage citizens worldwide are “suffering in silence and in isolation.”

“If I speak up, people of my background would feel tremendous fear. Many people have tremendous anger towards the Chinese Communist Party, but also tremendous fear,” Lin said. “After I won Miss World Canada, I would run into Chinese in supermarkets in Scarborough. They would come up to me and tell me in secret, just in a very quiet voice, ‘what you are doing is brave.’”