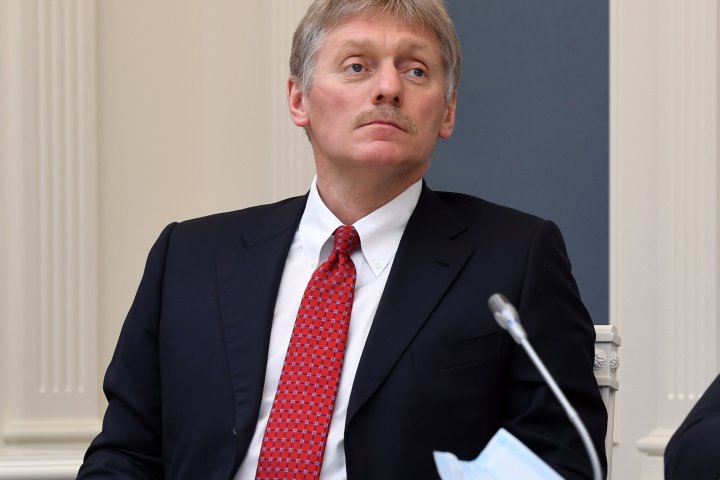 MOSCOW — Kremlin spokesman Dmitry Peskov has been hospitalized with the coronavirus, the latest in a series of setbacks for President Vladimir Putin as Russia struggles to contain the growing outbreak.

Also infected was Peskov’s wife, Olympic ice dancing champion Tatyana Navka. She told reporters that Peskov’s condition was “satisfactory” and that the couple decided to enter the hospital so as not to expose the rest of their family.

“He brought it (the virus) from work,” Navka was quoted as saying by the Daily Storm online outlet.

The Tass news agency quoted Peskov saying he last saw Putin in person “more than a month ago.”

Reporters from the Kremlin pool said on Twitter that Peskov was last seen in public on April 30 at a meeting with Putin. It was not clear whether the two were in the same room because Putin has been conducting his meetings via teleconference in recent weeks from his residence in Novo-Ogaryovo, outside Moscow.

Peskov is not the only top government official to come down with the coronavirus. Prime Minister Mikhail Mishustin revealed April 30 that he had tested positive for the virus. The next day, Construction and Housing Minister Vladimir Yakushev, was hospitalized with it, and Culture Minister Olga Lyubimova said last week she was self-isolating after getting infected.

The announcement of Peskov’s hospitalization came a day after Putin said Russia was slowing the outbreak and announced he was easing some of the nationwide lockdown restrictions.

But new questions are being raised about just how successful the response has been. Health officials reported thousands of new infections, many health care workers are falling ill with the virus amid complaints that protective gear is in short supply, and deadly fires have broken out at two hospitals for virus patients, apparently from defective breathing machines.

Mishandling the health crisis could hurt Putin’s public approval after more than 20 years in power. It has been declining since 2018, when he rolled out an unpopular reform that raised the retirement age for Russians, and it is currently at its lowest since 2013.

“If we start to see mass infections and it turns out that this was a wrong move … it will hit the government’s ratings hard,” former Kremlin speechwriter turned political analyst Abbas Gallyamov told The Associated Press. “People will definitely connect it this his (Putin’s) decision” to ease restrictions, he added.