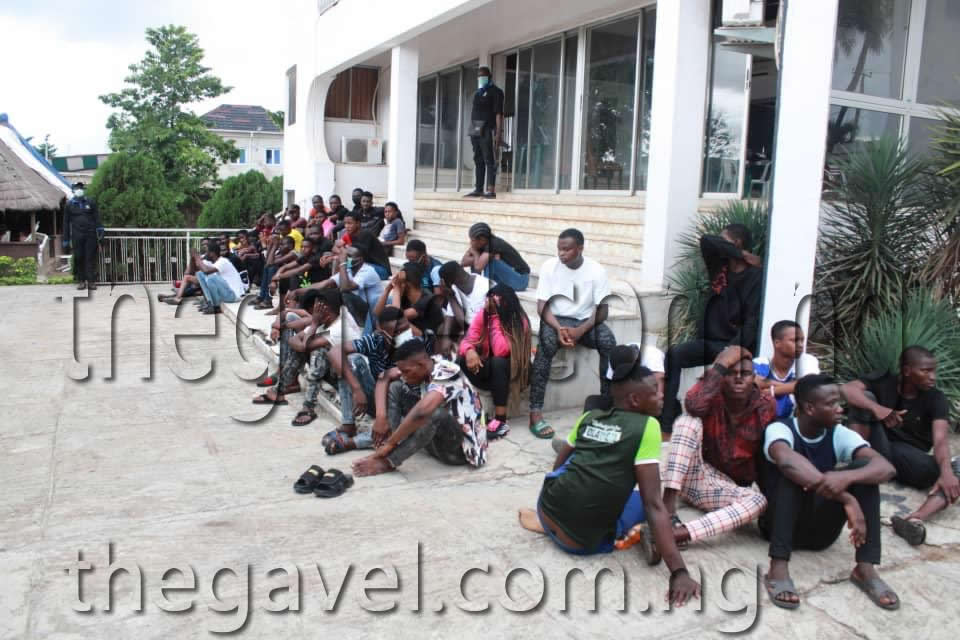 He told his mother that he was on his way to the hotel nearby to recharge his phone. Mama was reluctant to allow him to go as if her motherly instincts were warning her of the evil lurking around.

“But Mama, for three days now, we have had no electricity and my phone is dead”, he told his mother in an attempt to convince her to allow him to go. With hesitation, Mama consented. That was the beginning of Kamaldeen Muftau’s journey to the cell of the Special Anti Robbery Squad(SARS), at the General Investigations Department (GID) located at GRA, Ikeja.

Kamal, as he is fondly called by parents and friends, was one of the 65 persons arrested by the Lagos State Commissioner of Police, Mr Hakeem Odumosu in the aftermath of the lockdown of Lagos imposed by both the Federal and State governments at Spring Hill Hotel, Augusto Avenue, Oko Oba, Agege Lagos, on April 29, 2020.

These 65 young persons were allegedly attending a party when they were arrested by a police team led by the commissioner. They were taken to the headquarters of the State Police Command, and directly under the care of the SARS team. They also met others similarly arrested during the lockdown.

For Jamal and his friends, their encounter with the dreaded SARS team is not one they would wish for their enemies. “It was like hell”, Jamal said, adding that “the place called SARS is not a place to keep people like us who are not criminals but are observing 14 days isolation according to NCDC regulations”.

What the police told the arrested boys was that they must be placed in isolation to determine whether they have contacted the dreaded coronavirus.

Jamal continued:”With what I saw there, even if you are not positive of Coro, you might get it there. There was no distancing at all ! Common mouth cover the NCDC could not provide to us. We were shoulder to shoulder for those 14 days, and only God protected us. Among the hundreds released if one was infected oga, don’t you think he can infect others?”

Another young man, Adam narrated what he saw at the SARS. “There was no food program at all. Sometimes, for three days no one will give us food. Some people collapsed due to hunger. When this happens, they will bring the person out of cell, put him on the floor then inject him. After the injection they will now give him minerals(soft drink) and bread. Some will remain on the floor even after injecting them.They carry those ones to an unknown place;

Whenever a senior officer visits the place, that is when they will bring a plate of rice ( like 100 naira ) without meat. During that visit there would be no more brutality. But soon as Oga leaves, wahala starts. The most surprising thing is that they themselves smoke Indian hemp and other things inside the yard every night”.

Adam mentioned one Ibrahim Mubarak that was arrested at the hotel too. “He was asked to accept that he is a cultist so that they can stop the ferocious beating unleashed on him. When Mubarak received serious beating, he accepted he was a cultist, thinking that they would stop beating him. He was wrong! They now brought out weapons like cutlass and some knives, placed them in front of him and started taking his photographs. As I am talking to you now, he has been transferred to the Anti Cultism Department at Gbagada, Lagos. They (SARS officers) have weapons reserved that they use in framing the innocent ones”.

Kamal at this juncture interrupted and gave a vivid description of life in the cell. “We are over 70 in each cell and they have five cells. There’s no separation, no distancing. If you look at pictures when the CP arrested is in the hotel, we were well separated. But when we got to the SARS office we were packed like sardines. I was with my mask when I was arrested, but they removed it and pushed me into the cell. Inside, no single person had the facemask. I beg Oga Sanwo -Olu(governor) not to let SARS keep people that erred during the lockdown, they should be kept with the NCDC;

If your relative brings money for you , they will collect it and will not give it to you. We drink water from the cell toilet with a take away plastic. You drink water smelling the toilet. Ordinary cup to drink water is not there. If you see anyone with a mouth facemask, he should be a police or an oga. In all the five cells no one has a facemask”.

Kamal pleaded with the police to release a fair skinned boy arrested with him. “That coloured boy in black shorts is Kamaludeen Musbau. This boy is still there because he has a tattoo. Please Oga IG, before Kamalu gets contaminated with covid-19, let your boys release him to his widowed mother. The boy is not a bad boy at all. He only likes football and imitates how players design their body. No exhibit(was found on him). Why are they still holding this boy?”

Kamal and some others were released last week Monday, May 11, 2020 alongside Adam and some others, 14 days after their arrest. They were in tears as they narrated their tales to Gavel International.

Meanwhile, people living at Maricas area in Agege also narrated the ordeal they went through in the hands of the police whom they accused of looting their shops in the course of the curfew imposed by the government.

Mallam Sani Yusuf Muhammad said he was in his shop at Adenle Street, off Alfa- Nla, Agege, when the police from Area G arrived. He was asked to put off his generator. When he did, they took the generator, put it inside the police van and drove off. It was 9pm.

Mr Sylvester Moses who operates a Baba Ijebu lotto at Alfa-Nla experienced a similar ordeal from the same set of policemen. They urge the IGP to tell his boys in Area G to return their generators because it is their source of living.

In a telephone conversation with Gavel International, the PPRO denied detaining those arrested for flouting lockdown regulations for more than the “necessary” period. “Most of those we arrest are usually detained until they can face trial at the Mobile Court. You know Mobile Courts do not sit every day. Those arrested are therefore kept with us until their trial”.

Another category of people kept in police custody are those that have been ordered by the court to be remanded at the correctional centers. ” One of the rules of the correctional centers is that they must know the COVID-19 status of defendants before they can be admitted. We therefore keep such people in our custody until the centers confirm whether they are COVID-19 positive or negative”, Mr Elkanah further said.

The third category are those arrested for capital offences like murder or cultism. “You don’t expect us to release these people so that they can continue to terrorize Lagosians. You will recall what Lagosians went through in the hands of cultists in recent times as they terrorized virtually every part of Lagos. All Lagosians suddenly became vigilantes to protect their lives and properties.Such people will have to be in detention until their arraignment in court”, he said.

Mr Elkanah particularly recalled the Oko Oba hotel issue. He said the command received information from the people living in the area to the effect that cultists are gathering in the hotel to carry out their activities. “The public too is working.When we got there, we met them as reported. Some of them were between 10-15 inside a room performing their cultist rituals. Some of them are Buccaneers, while others belonged to other related cult groups. Their relatives mounted serious pressure on us to release them but the CP did not bulge. Should we release them and allow them to be terrorizing the people again? If we do, they will become more emboldened and the society will not know peace”.

Sheik Muaz Abdullahi Muaz, the Head and Founder of DARUL ILM UL QURAN of Moricas Agege blamed the people for disobedience to the law of land. According to him, “Prophet Muhammad taught Muslims how to go about any case of a pandemic, but he did not mention Corona as some scholars have claimed. If you disobey the law of your leaders, you have disobeyed God, because Allah put them there. Anybody who asks why a market should be opened and not a mosque lacks knowledge. The prophet said you pray in your home in situations like this, but markets cannot be in the home.”

He further said, “Some think God is different from the government. Government is God and God is government, therefore if you are punished for disobedience to law, it is God’s punishment. Muslims should be the ones to obey these COVID-19 regulations because the prophet said a lot about it. For example, if there is pandemic in the country, don’t leave or come in. Is that not a lockdown?

As for the policemen collecting generators from the owners, that is a very bad attitude. This is where Imams and pastors come in. The government should carry these people along, to always preach to the policemen so that the fear of Allah will enter their hearts. If they have the fear of Allah they won’t do such shameful acts, and they still have salaries waiting while these ones have no salary at the end of the month, they pay themselves from what they extort from;

We call on the IGP asmatter of urgency, to fish out those policemen”.