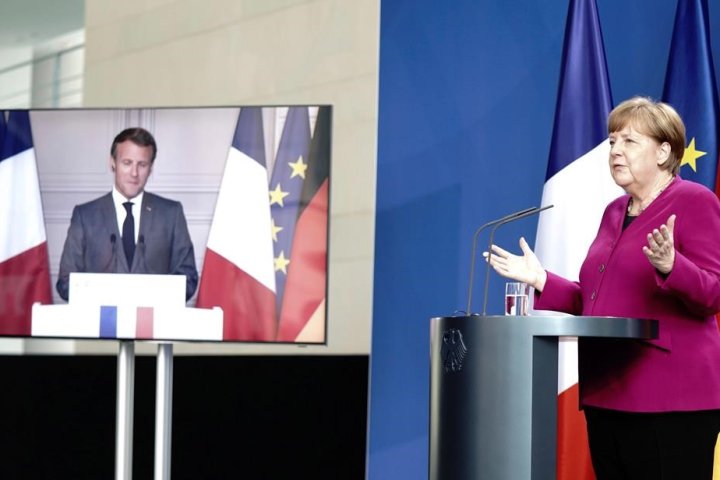 BERLIN — The leaders of Germany and France agreed Monday on a one-off 500 billion-euro ($543 billion) fund to help the European Union recover from the coronavirus pandemic, a proposal that would add further cash to an arsenal of financial measures the bloc is readying to cope with the outbreak’s economic fallout.

Following a video call, German Chancellor Angela Merkel and French President Emmanuel Macron said the plan would involve the European Union borrowing money in financial markets to help sectors and regions that are particularly affected by the pandemic.

Crucially, the money would be disbursed in the form of grants rather than loans, with repayments made from the EU budget, an unprecedented proposal that overcomes long-standing objections in Berlin to the notion of collective borrowing.

“Because of the unusual nature of the crisis we are choosing an unusual path,” Merkel told reporters following the joint announcement.

Macron said the proposal was a way “to make Europe move forward.”

“We must draw all lessons from this pandemic,” he said, insisting on the need for “solidarity” between EU member states.

Macron acknowledged that a French-German deal alone “doesn’t mean an agreement from the 27.” The EU’s executive Commission would make its own proposal to EU member states and “we hope that the French-German deal will help,” he said.

You should also READ  Opponents to China’s security bill are ‘enemy of the people,’ Hong Kong leader says

“It acknowledges the scope and the size of the economic challenge that Europe faces, and rightly puts the emphasis on the need to work on a solution with the European budget at its core,” she said.

There has been concern in European capitals that the pandemic and the bloc’s initial uncoordinated response to it could boost anti-EU sentiment in member states.

Merkel said it was important to ensure that all EU countries could respond to the economic challenge “and that requires this unusual, one-off effort that Germany and France are now prepared to take.”

Fagbemi leads five other SANs in battle for Kalu's release