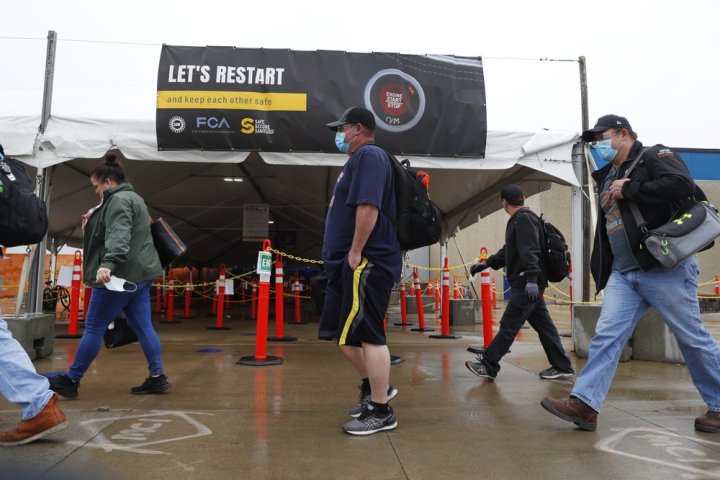 American car makers are getting back to work and Europe is continuing to reopen. But while new coronavirus cases have been declining in many countries that were initially hit hard by the pandemic, cases are rapidly rising in other populous nations.

Russia and Brazil now sit behind only the U.S. in the number of reported cases. And cases are spiking from Mexico to India. Some places have seen encouraging signs reverse: Iran reported a steady drop in new cases through April only to see them rise again in May.

But there is new hope after an experimental vaccine against the coronavirus yielded encouraging results in a small and extremely early test. Stocks rallied on the news.

And in a surprise announcement, U.S. President Donald Trump said he’s been taking a malaria drug to protect against the virus even though his own administration has warned it should only be administered in a hospital or research setting because of potentially fatal side effects.

Despite warnings from health experts that the virus could make a resurgence, many states have eased lockdowns under pressure from Trump to save businesses and livelihoods.

Europe also has pushed ahead with reopening, allowing people into the Acropolis in Athens, high-fashion boutiques in Italy, museums in Belgium, golf courses in Ireland and beer gardens in Bavaria.

But in India, with a population of 1.3 billion, cases have surged past 100,000, and infections are rising in the home states of migrant workers who left cities and towns during a nationwide lockdown when they lost work.

India is seeing more than 4,000 new cases every day, with states including West Bengal, Bihar, Odisha and Gujarat _ the major contributors of the migrant labour workforce in the country _ showing a major spike in infections as lockdown rules were eased. More than 3,100 have died, according to India’s health ministry.

And in densely populated Bangladesh, where authorities on Monday reported a record 1,602 positive tests, thousands of cars were on the streets of the capital, Dhaka, despite a lockdown that extends through May 30.

Authorities in Bangladesh have relaxed some rules and allowed shops to open ahead of the Muslims’ biggest festival, Eid al-Fitr, at the end of the month. Public transportation is suspended but the country’s thousands of garment factories are operating.

In the U.S., more than 130,000 autoworkers returned to factories for the first time in nearly two months Monday in one of the biggest steps yet to restart American industry.