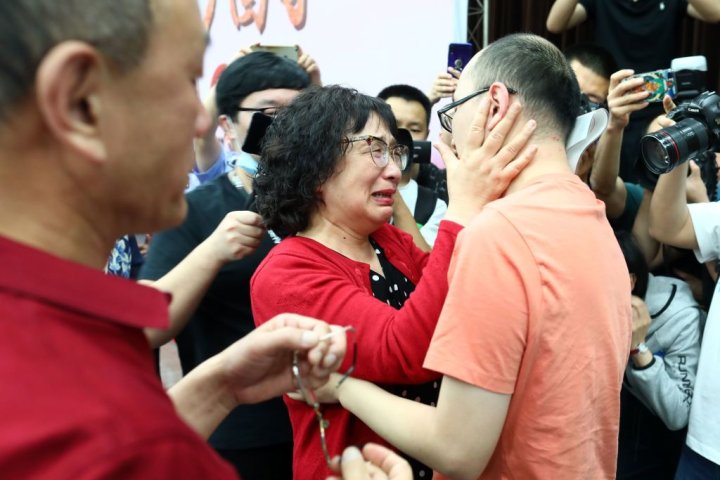 They spent more than three decades searching for their abducted son, and have finally found their happy ending.

As a child, Mao Yin was walking home from school with his father when they stopped to get a drink of water. In the moment his dad, Mao Zhenjing, looked away, Yin was taken, the South China Morning Post says.

According to the BBC, he was sold to a couple who didn’t have kids for the equivalent of $840 today. No information has been released so far about the people who bought him, as the investigation is still ongoing.

After Yin’s abduction, his parents spent their lives searching for him, often appearing on TV talk shows. His mother, Li Jingzhi, distributed more than 100,000 flyers, the BBC says.

She spent those three decades helping 29 families reunite with their missing children, before she was able to live the same miracle.

On Monday, the parents were finally reunited with their now-34-year-old son in an emotional police news conference filmed by Chinese state-broadcaster CCTV and posted on Chinese social media site Weibo.

A report by CCTV says that Yin was raised by his adoptive parents as Gu Ningning. He didn’t know his biological parents had been searching for him.

Police in Xian, the family’s home province, received a tip that a man in Sichuan bought a child in the late-1980s, state news agency Xinhua reported.

You should also READ  Iran confirms its first 2 coronavirus cases

Using facial recognition technology, police officials were able to analyze an old photo of Yin as a boy, which created a hypothetical image of him as an adult, CNN reports. After comparing photos to a national database, they were able to track him down.

DNA testing proved that Gu was the same person.

“I can’t believe that after helping 29 missing children find their families, I am able to find my own son,” she told Xinhua.

Yin told the news publication that he’d stay with his biological parents for a few days before returning to his home in Sichuan to “deal with some of his own issues.”