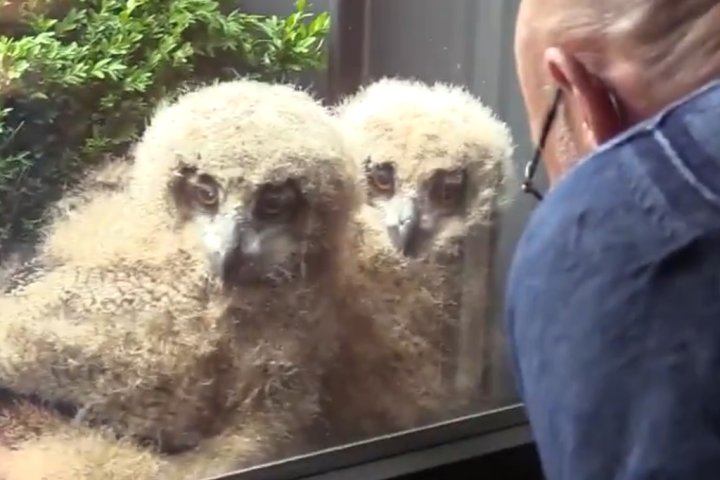 At first, a Belgian man thought the noise coming from his outdoor planter was pesky pigeons. Turns out, it was Europe’s largest owl — four of them.

One of the world’s largest owls, the Eurasian eagle owl, set up camp in Jos Baart’s third-storey apartment planter. Since the mother owl’s three gigantic chicks hatched, they’ve taken to watching TV through the window with their new landlord.

In video footage shared by Dutch nature show Vroege Vogels (or Early Birds in English), the huge, fluffy chicks can be seen standing at attention in a row, eyeing the television screen over Baart’s shoulder.

Their less-friendly mom typically watches over her hatchlings from behind a shrub, seemingly a little warier of Baart and her babies’ TV-watching habits.

“She has a good view of the nest from there,” he explains in the video. “She can stay there for six to eight hours at a stretch.”

They seem to have grown accustomed to each other now, but it wasn’t long ago Baart thought they were a nuisance.

“I thought, damn, those pigeons again,” he says in the video.

He was proven wrong one day when he arrived home and the large mother owl took flight right in front of him.

“You can see how relaxed they are,” Baart says in the footage. “They’re not scared at all. For me, it’s like watching a movie 24-7.”

Guinness World Records recognizes the species (also known as the Bubo bubo) as the largest owl in the world, with a wingspan of more than 1.5 metres.