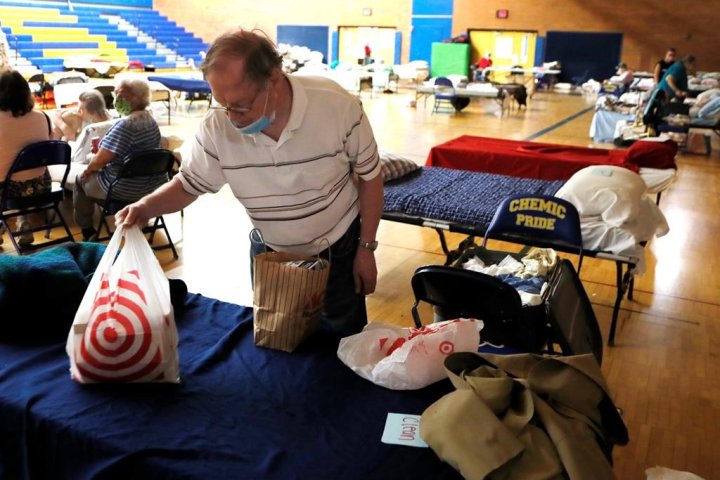 Many Central Michigan residents remained cut off from their homes Thursday even as floodwaters receded, with senior citizens among the scores of displaced people staying in shelters after flooding overwhelmed two dams, submerged homes and washed out roads.

President Donald Trump, who was in Michigan to visit a Ford production plant, signed an emergency declaration authorizing the Department of Homeland Security and the Federal Emergency Management Agency to coordinate disaster relief efforts.

At Midland High School, 90% of people who slept in the school’s gym were senior citizens, said shelter coordinator Jerry Wasserman. He said extra precautions were in place due to the combination of the guests’ ages and the coronavirus pandemic.

“We had to deal with COVID and then deal with their angst of what’s happened to their house and their pets and all this” Wasserman said Thursday.

In Midland, 61 people spent Wednesday night and Thursday morning in temporary shelters, according to city spokeswoman Selina Tisdale. That number — mostly the elderly and families — dwindled throughout Thursday as floodwaters receded and some residents were able to return home, she said.

Dan Roberts, who was a Midland High student more than a half-century ago, spent a few nights at the shelter and said “anyone else who had a place to go went to elsewhere.” He planned to go stay with his sister in the Flint area.

You should also READ  Nursing homes screening for coronavirus can’t rely only on symptoms: investigation

“They’ve been watching after us carefully. It’s been a little hectic, but I would not complain at all,” said Roberts, a 70-year-old who lives at the Riverside Place senior living community that was overcome with floodwater.

Much of the area remained underwater, including in Midland, the headquarters of Dow Chemical Co. And floodwaters continued to threaten downstream communities.

It could be days before the full scope of damage can be assessed, officials said. No flood-related deaths or injuries have been reported.

“The damage is truly devastating to see how high the water levels are, to see roofs barely visible in parts of Midland, and to see a lake that has been drained in another part,” said Gov. Gretchen Whitmer, who toured Midland County on Wednesday.

The floodwaters mixed with containment ponds at a Dow Chemical Co. plant and could displace sediment from a downstream Superfund site, though the company said there was no risk to people or the environment.