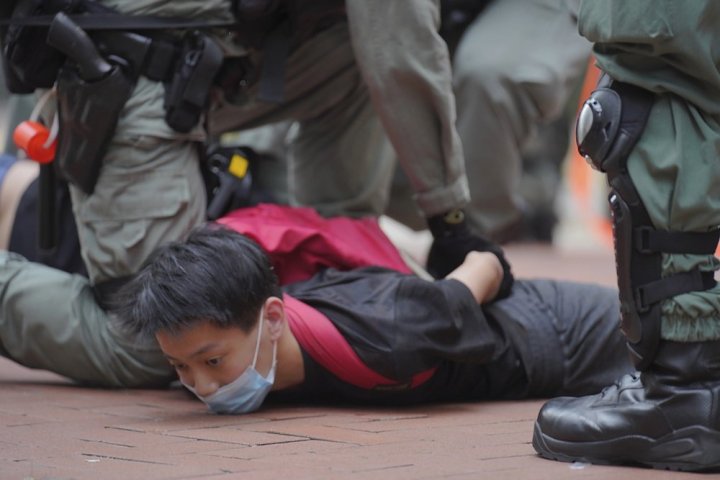 Hong Kong police fired tear gas and a water cannon at protesters in a popular shopping district on Sunday, as thousands took to the streets to march against China‘s proposed tough national security legislation for the city.

Pro-democracy supporters in Hong Kong have sharply criticized the proposal last week to enact a national security law that would ban secessionist and subversive activity, as well as foreign interference, in the semi-autonomous Chinese territory. Critics say it goes against the “one country, two systems” framework that promises the city freedoms not found in mainland China.

The protest was a continuation of a monthslong pro-democracy movement in Hong Kong that began last year and has at times descended into violence between police and protesters.

At least 120 people were arrested, mostly on charges of unlawful assembly, police said in a Facebook post.

They also said in a separate post that protesters threw bricks and splashed unidentified liquid at officers, injuring at least four members of the police’s media liaison team. They warned that such behaviour is against the law and that police would pursue the matter.

You should also READ  FBI to review Flynn investigation for misconduct

Earlier in the afternoon, prominent activist Tam Tak-chi was arrested during the protest for what police said was unauthorized assembly. Tam said he was giving a “health talk” and was exempt from social-distancing measures that prohibit gatherings of more than eight people.

The bill that triggered Sunday’s rally was submitted at China’s national legislative session on Friday and is expected to be passed on May 28. It would bypass Hong Kong’s legislature and allow the city’s government to set up mainland agencies in the city that would make it possible for Chinese agents to arbitrarily arrest people for activities deemed to be pro-democracy.

Speaking on the sidelines of the annual session of China’s ceremonial parliament in Beijing, Chinese Foreign Minister Wang Yi said Sunday that Hong Kong affairs were an internal matter for China, and that “no external interference will be tolerated.”