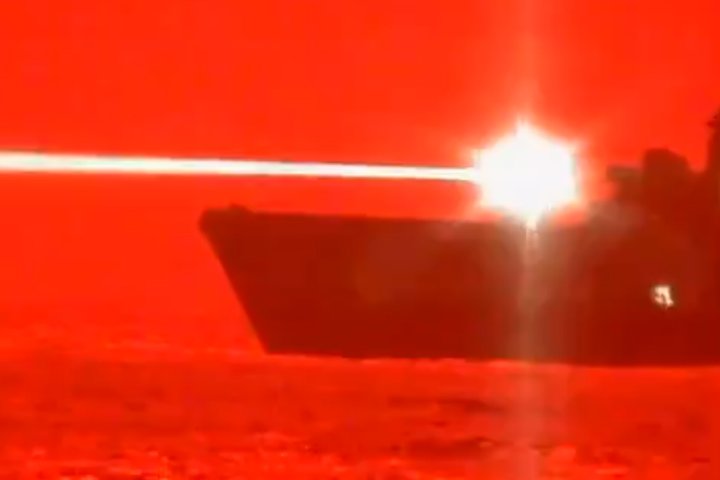 The U.S. navy is closing the gap between real-life laser pointers and fictional death rays, after successfully demonstrating a new energy weapon that can supposedly shoot down an enemy aircraft with a beam of light.

The navy released footage of its ship-mounted laser cannon over the weekend, which shows a supposedly successful weapons test involving the USS Portland near Hawaii on May 16.

The video is brief, flashy and a little disappointing, if only because there is no audio to indicate whether the laser makes a “pew pew” sound.

The remarkable new weapon has a remarkably boring name: LWSD, short for Solid State Laser — Technology Maturation Laser Weapon System Demonstrator. Nevertheless, it looks like a Death Star-type superweapon when it fires, with a steady, sustained laser ray and a bright halo of light around the weapon’s barrel.

The successful test will help the U.S. navy understand how best to use its new weapon, said Capt. Karrey Sanders, commanding officer of the USS Portland, in a news release. He added that the test is “paving the way for future weapons systems,” and that the LWSD will be a new tool for tackling a wide range of threats.

The U.S. navy has been tinkering with so-called “direct energy weapons” or lasers, since the 1960s, and has used them in the past to target and disrupt incoming missiles. It’s also equipped a few different vessels with lasers in recent years.

However, the latest test is the first use of a high-energy class solid-state laser, according to the navy.

The LWSD was developed by Northrup Grumman and installed on the USS Portland, an amphibious transport dock ship.

It’s the latest new offering in a high-sea arms race between the U.S. and its rivals, including China, which unveiled its own futuristic railgun weapon last year.

China has been accused over the last year of firing lasers from its own navy ships amid tension over territorial control of the disputed South China Sea. however, it has refuted those claims.

It’s unclear at this point how many lasers are deployed at sea for naval warfare, or how much damage they can do. However, the U.S. navy’s latest test indicates that it’s pushing hard to get ahead of the game, according to Capt. Sanders.