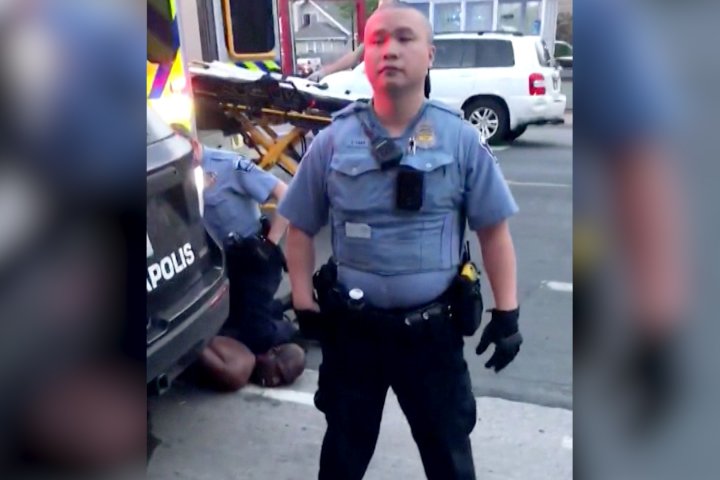 A black man has died in Minneapolis police custody after video shared online from a bystander showed a white officer kneeling on his neck during his arrest as he pleaded that he couldn’t breathe.

His death Monday night after a struggle with officers was under investigation by the FBI and state agents. It drew comparisons to the case of Eric Garner, an unarmed black New York man who died in 2014 after he was placed in a chokehold by police and pleaded for his life saying he couldn’t breathe.

On Tuesday morning, Minneapolis Mayor Jacob Frey apologized to the black community in a post on his Facebook page.

Minneapolis police said the man matched the description of a suspect in a forgery case and resisted arrest. The video shows an unidentified officer kneeling on his neck and ignoring his pleas. “Please, please, please I can’t breathe. Please, man,” the man is heard telling the officer.

After several minutes, one of the officers is heard telling the man to “relax.” “Man, I can’t breathe,” the man responds. Several more minutes pass and the man becomes motionless under the officer’s restraint.

You should also READ  ‘All fires now contained’ in Australia’s most populous state, officials say

Several witnesses had gathered on a sidewalk near where the man was lying, with some recording on their phones. Bystanders became increasingly agitated as the man pleads with police, with one bystander telling officers that they need to let him breathe.

Minneapolis Police Chief Medaria Arradondo, speaking to reporters Tuesday morning, was asked about the use of the knee on the man’s neck during the arrest.

“We clearly have policies in place regarding placing someone under control,” Arradondo said, stating that taking a look at what happened and how those policies apply “will be part of the full investigation we’ll do internally.”

Nekima Levy-Armstrong, a prominent local activist, said watching the footage that was shared on social media made her “sick to her stomach” and said it reminded her of the Garner case, she told the Star Tribune. A grand jury later decided against indicting the officers involved in Garner’s death, sparking protests around the country.

The man’s death in Minneapolis also came amid outrage over the death of Ahmaud Arbery, who was fatally shot Feb. 23 when a white father and son pursued the 25-year-old black man after spotting him running in their subdivision. More than two months passed before charges were brought.

Officers in Minneapolis were called about 8 p.m. Monday to investigate a report of a forgery at a business, according to police spokesman John Elder. Police found the man, believed to be in his 40s, matching the suspect’s description in his car.