Woman called police on a Black man in Central Park, then she was put on leave from work 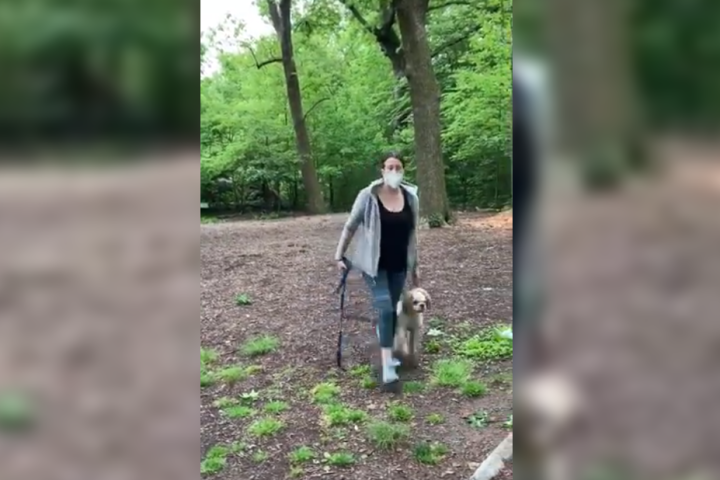 An American woman has been put on administrative leave by her employer after a video appearing to show her calling the police on a Black man who asked her to leash her dog went viral Monday.

Christian Cooper, who claims he is the man behind the video, wrote on Facebook that he encountered the woman and her dog in the Ramble, a nature reserve within Manhattan’s Central Park where dogs are required to be leashed. Cooper’s sister, Melody Cooper, who also posted the video, said her brother is an “avid” bird watcher and “politely asked (the woman) to put her dog on the leash.”

Christian Cooper wrote on Facebook that after the woman refused to leash her dog and take it to an off-leash area, he offered the dog a treat. After she loudly told him not to touch her dog, Cooper says he started recording.

In the video, the woman comes toward the camera while telling the person behind the camera to stop filming. After the person asks her not to come closer, the woman pulls out her phone and says she’s going to tell police that “there is an African-American man threatening my life.” The man tells her to “tell them whatever you like.”

The woman then moves away from the person filming to make the call, dragging the dog by the collar.

The woman can be heard repeatedly claiming the man is “threatening me and my dog.” Despite no signs that the man filming her, or anyone else, is advancing towards her, the woman becomes louder as she talks into the phone.

“Please send the cops immediately!” she yells as she puts a leash on her dog, which prompts the person recording the video to thank her.

The New York Police Department told Global News they were, indeed, called to the Ramble on Monday morning, but no arrests were made and no complaint was filed as nothing criminal occurred. Neither the woman nor the man filming were in the Ramble when officers arrived, the department added.

The video had been viewed roughly 15 million times by the end of day Monday. It also prompted widespread criticism of the woman’s actions on social media, with many calling them racist.

Social media users quickly identified the woman as Amy Cooper — no relation to Christian or Melody Cooper — who is an employee at Franklin Templeton, an investment firm in New York. The firm’s website crashed and stayed down for hours Monday evening after social media users urged their followers to demand the company fire the woman.

In a statement on its Twitter page, Franklin Templeton said the employee has been put on administrative leave, pending an investigation into the incident.