‘They murdered my brother’: Sister of Minneapolis Black man speaks out on deadly arrest 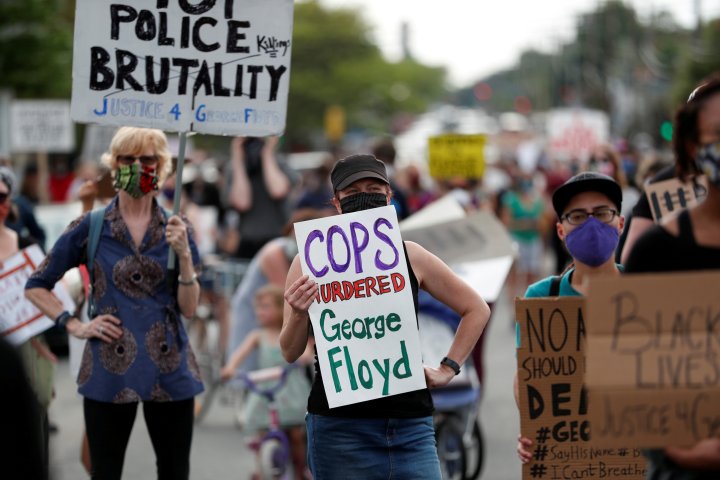 The sister of an African-American man who died shortly after a white Minneapolis police officer pinned him down with a knee to the neck called for justice on Wednesday, saying the firing of four policemen over the deadly incident was not enough.

The four officers were dismissed from the force on Tuesday, a day after the death of George Floyd, 46, who lived in suburban St. Louis Park, Minnesota. Video taken by a bystander showed Floyd lying face down in the street, gasping for air and groaning, “I can’t breathe” on Monday evening.

“They murdered my brother. They killed him. They need to apply more pressure on these guys. Firing them is not enough,” Bridgett Floyd told ABC’s Good Morning America.

The officers were not immediately identified by the Minneapolis police department, and it was not known whether any of them had retained lawyers.

The Police Officers Federation of Minneapolis, the union that represents the city’s police force, was not immediately available for comment.

The case was reminiscent of the 2014 killing of Eric Garner, an unarmed black man in New York City, who died after being put in a police chokehold and telling the officers, “I can’t breathe.”

That incident was one of a series of killings of black men by U.S. police officers that gave fuel to the ‘Black Lives Matter‘ movement, which campaigns against violence and systemic racism towards black people.

You should also READ  As the White House coronavirus outbreak spreads, Trump encourages states to reopen

Thousands of protesters filled the streets around the scene of the deadly incident in a boisterous rally on Tuesday, with many wearing facial coverings to protect against spread of the novel coronavirus.

The gathering took an unruly turn around dusk as police in riot gear fired tear gas and non-lethal bean-bag rounds into the crowds, while protesters hurled water bottles and other projectiles, the Minneapolis Star-Tribune reported.

“It was nine minutes on his neck,” Attorney Benjamin Crump, retained by Floyd’s family, said on Wednesday on ABC.

—Reporting by Brendan O’Brien in Chicago; editing by Bernadette Baum

France elects its first transgender mayor: ‘They voted for my program’