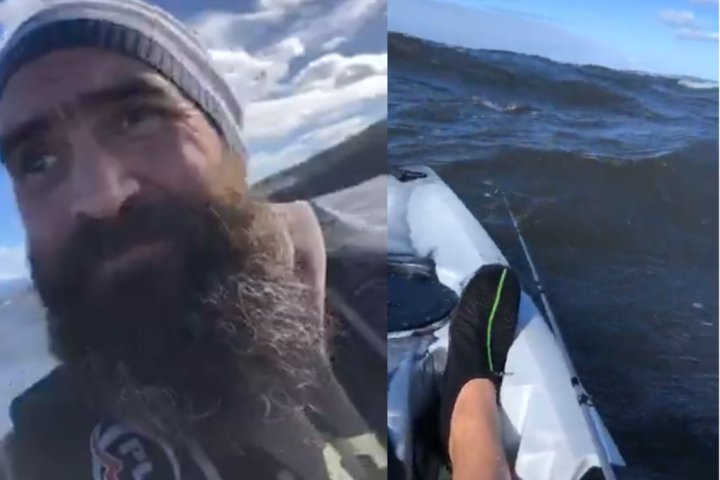 A heartbreaking video shows what are thought to be the final moments of an Australian kayaker stranded by a swell off the coast of New South Wales, where his body later washed up on shore.

Jeremy Peter Worthy, 43, went live on his personal Facebook page on Saturday as he struggled against high waves that prevented him from getting back to shore during a fishing trip.

He posted a 10-minute video from his kayak at around 5:45 p.m. that day. Worthy, appearing to wear a life-jacket, can be seen bobbing up and down in choppy waters.

“I thought it’d be a problem,” he says in the video. “This is taking me for a ride.”

He also shared a photo of his geographical whereabouts that day, showing his geo-location to be in a bay near Cullendulla Creek.

Less than an hour later he went live again, this time for a four-minute clip explaining how tiring it was for him to paddle to shore. The high winds cut out much of his voice.

“There’s no going back where I came, that’s too far,” he can be heard saying in the video. “(Do I) keep going or stay here?”

A tweet by the Bureau of Meteorology in New South Wales warned locals of “a monster southerly swell up to 4 to 5 metres and strong winds,” encouraging people to stay away from rock ledges and check their skill level before going into the water.

You should also READ  No evidence of coronavirus becoming less severe: WHO, experts say

On Sunday, the New South Wales police released a statement regarding the suspected drowning death of a man believed to be age 43. The man was pronounced dead at the scene on the state’s south coast.

Glenn Sullivan, the regional operations manager for Marine Rescue Monaro, confirmed that Worthy had died in an interview with the Bay Post/Moruya Examiner.

Meanwhile, Worthy’s Facebook account has become an official memorial page, where many of his friends and loved ones have shared their condolences.