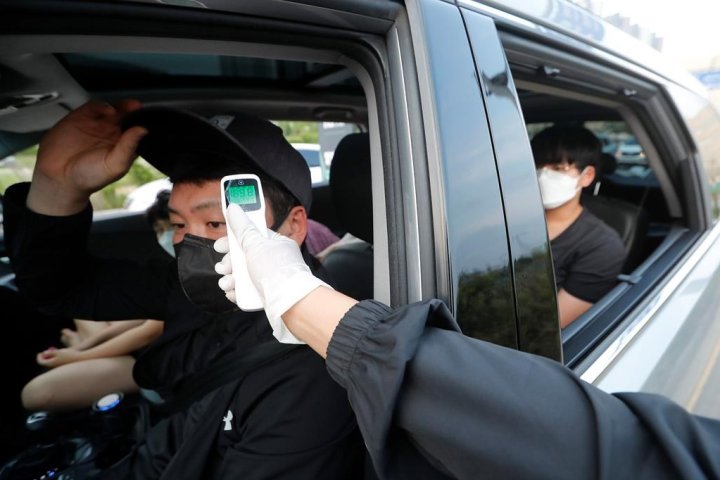 South Korea reported 79 new coronavirus cases on Thursday, the most since April 5 and the third straight day of rising infections, raising the specter of a second wave of disease in a country widely praised for containing the initial outbreak.

Health Minister Park Neung-hoo said at least 69 cases so far this week have been linked to a cluster of infections at a logistics facility operated by Coupang Corp, one of the country’s largest online shopping firms, in Bucheon, west of Seoul.

According to the Korea Centers for Disease Control and Prevention (KCDC), the new cases brought the country’s total as of midnight on Wednesday to 11,344 with 269 deaths. South Korea’s robust program of testing earlier this year was credited with helping the number of deaths comparatively low in a global pandemic that has now killed more than 350,00.

The warehouse cluster appears linked to an outbreak that emerged in several Seoul nightclubs and bars in early May, the KCDC said, and comes as the country seeks to ease social distancing rules, reopen schools, and keep new virus infections in check.

Unlike many countries, South Korea didn’t impose a strict lockdown to counter the new coronavirus, but officials said if new cases keep rising, they may consider issuing new guidelines.

Health officials said on Thursday they would be conducting on-site inspections of logistics centers across the country, to develop better policies for preventing outbreaks at such facilities.

Coupang, backed by Japanese tech conglomerate SoftBank Group , said it closed the Bucheon facility on Monday. It said on Thursday it had also closed a separate facility in Goyang, in the Seoul suburbs, after an employee tested positive there.

“As soon as the employee’s diagnosis was confirmed, Coupang sent home and self-quarantined employees who had contact with the employee,” the company said in a statement.

The spreading outbreak and warehouse closures come as Coupang and other e-commerce firms scramble to keep up with a surge in orders as more people opted to shop from home during the coronavirus outbreak, despite the absence of a strict lockdown.

In February, March and April, sales of South Korean online retailers including Coupang jumped 34%, 17% and again 17% respectively from the same months a year ago, according to trade ministry data.

That compared with offline retailers’ sales that dropped 7.5%, 18% and 5.5% in the same three months from a year earlier.