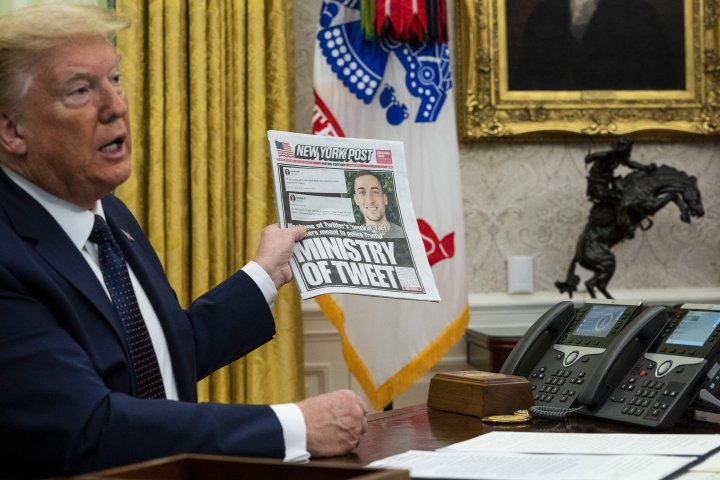 Donald Trump launched a Twitter war of a different sort Thursday, picking a fight with the online platforms that helped to shape his political career — a feud that, should it escalate, could curtail free speech in the United States and even run afoul of North America’s new trade pact.

Angered by Twitter’s decision to place fact-check flags on two of his recent tweets, Trump signed an executive order Thursday authorizing a review of Section 230 of the U.S. Communications Decency Act, a cornerstone of the modern-day internet that protects online platforms from being held liable for third-party content on their sites.

While the move is being billed by the White House as a full-throated defence of America’s precious constitutional right to free expression, and dismissed by others as posturing, experts say changes to the law would encourage companies like Twitter, Google and Facebook to simply hit delete rather than defend the rights of those who post contentious statements online.

“Countries that do not have these kinds of provisions find that platforms will often err on the side of removing content,” said Michael Geist, a law professor at the University of Ottawa who specializes in online and e-commerce issues.

“That would probably be, at the end of the day, the crucial takeaway here: this is framed as being measures designed to help safeguard free speech, and yet limiting some of these kinds of protections would have the effect of doing the opposite.”

You should also READ  ‘Anything to demean’: Trump calls fake news on bad photo of himself

Section 230, credited by many as the foundation on which Big Tech is built, has been the subject of heated debate on Capitol Hill in recent years as the 20-year-old vision of the internet as a self-policing free-speech utopia has been sullied by the seedier corners of cyberspace, where hate speech, misogyny and disinformation campaigns flourish.

But congressional concerns about the law depend on which side of the aisle they’re coming from: while Democrats take issue with content that foments hatred and falsehoods, Republicans complain about efforts to moderate content that they say end up suppressing conservative viewpoints.

That’s what Trump contends Twitter was doing when a pair of tweets he sent Tuesday claiming mail-in ballots are vulnerable to election fraud were tagged with links urging followers to “get the facts about mail-in ballots.” The links led readers to a brief note that called the claims “unsubstantiated,” citing reports by CNN and the Washington Post — two of the president’s most loathed media outlets.

The Communications Decency Act isn’t the only place where the text of Section 230 appears. It also happens to be part of the digital chapter of the U.S.-Mexico-Canada Agreement, where it was included to ensure that the protection it provides technology companies in the U.S. is applicable right across North America.

“The extent to which the United States decided that it was going to create new levels of liability for these platforms, counter to or in conflict with what’s found in Section 230 — that might run afoul of their new obligations under the USMCA,” Geist said.