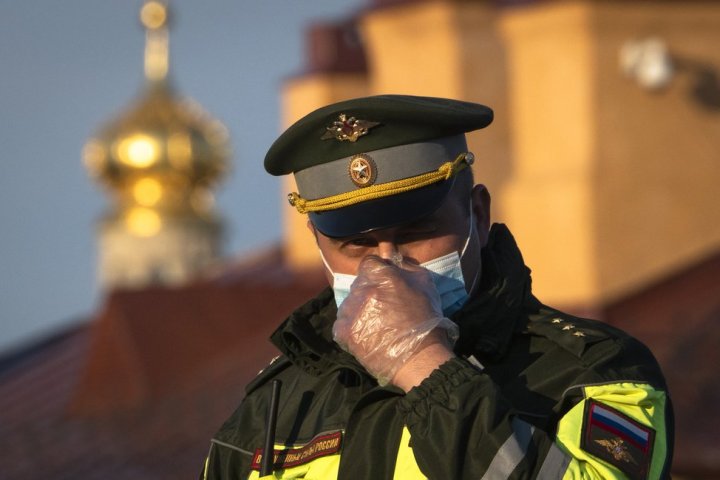 As the United States crossed a sombre landmark of 100,000 coronavirus cases, India registered record numbers Thursday while Russia continued to swiftly ease restrictions in sync with the Kremlin’s political plans despite a continuing high pace of infection.

The once-unthinkable death toll in the U.S. means that more Americans have died from the virus than were killed in the Vietnam and Korean wars combined.

India, home to more than 1.3 billion people, reported more than 6,500 new infections Thursday as cases continued to rapidly rise. The surge comes as the nation’s two-month-old lockdown is set to end Sunday.

South Korea on Thursday reported its biggest jump in coronavirus cases in more than 50 days, a setback that could erase some of the hard-won gains that have made it a model for the rest of the world. Health officials warned that the resurgence is getting harder to track and social distancing and other steps need to be taken.

And in Russia, high daily numbers of new coronavirus infections underlined the risks of reopening the economy, which has been badly battered by the outbreak.

Earlier this week, Russian President Vladimir Putin announced that Russia will hold a military parade marking the 75th anniversary of the Nazi defeat in World War II on June 24, declaring that the nation has passed the peak of the pandemic that had forced the Kremlin to postpone the celebrations.

The massive May 9 parade marking Russia’s most important holiday was intended to emphasize the nation’s key role in World War II and underline its international clout, with French President Emmanuel Macron and other world leaders set to attend. The Russian Foreign Ministry said Thursday that Moscow will now resend the invitations to Macron and others.

Russian media reported that the Kremlin now also plans to go ahead with another high-priority event on Putin’s political agenda — a plebiscite on constitutional amendments that could allow him to stay at the helm through 2036 if he chooses. The Russian president postponed the vote from April because of the outbreak.

The government’s anti-coronavirus task force reported more than 8,300 new infections Thursday, about the same as in the previous day and lower than the peak levels of more than 11,000 cases earlier this month. The total number of infections topped 379,000, the world’s third-largest caseload behind the United States and Brazil.

Some Kremlin critics alleged that the nation’s relatively low coronavirus death toll might reflect manipulations driven by the authorities’ desire to set a positive environment for both the parade and the constitutional vote.