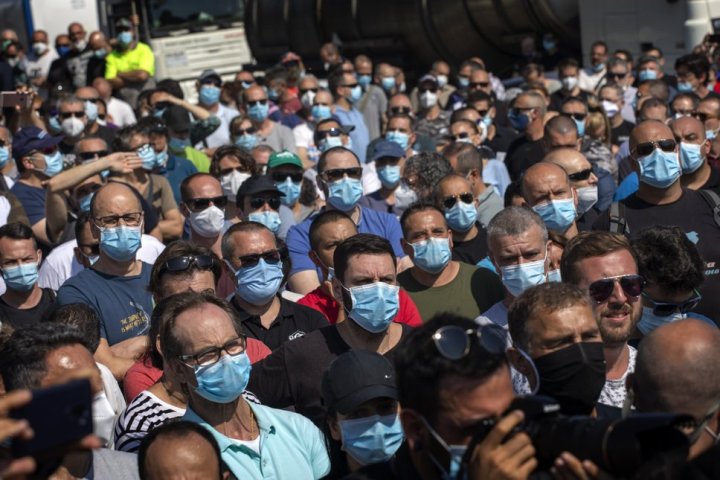 Europe’s extensive social welfare net is showing signs of fraying under economic strain from the coronavirus, as protests erupted for a second day in Spain Friday against layoffs by French carmaker Renault, while Italy’s chief central banker warned that “uncertainty is rife.”

Further afield, while New Zealand had all but eradicated the coronavirus with just one person in the nation of 5 million known to be still infected, developments elsewhere were generally grim. India reported another record increase in cases and Pakistan a record number of deaths.

As cases steadily rise across Africa, too, officials who are losing the global race for equipment and drugs are scrambling for homegrown solutions.

In the first major increase since it started gradually reopening May 11, France reported more than 3,000 new daily virus infections. It was not immediately clear if the spike was due to a greater availability of testing.

In the U.S., the virus threw more than 2 million people out of work last week despite the gradual reopening of businesses, stoking fears it is doing deep and potentially long-lasting damage to the world’s largest economy.

The latest job-loss figures from the U.S. Labor Department bring to 41 million the running total of Americans who have filed for unemployment benefits since the coronavirus shutdowns took hold in mid-March.

Strong safety-net programs in many European countries are underwriting the wages of millions of workers and keeping them on the payroll instead of adding them to the ranks of the unemployed. But the limits are starting to show.

In Britain, Treasury chief Rishi Sunak is expected to tell employers that starting in August, they’ll have to share the costs of a program that has effectively placed furloughed workers on the government payroll.

Sunak says the government can’t pay indefinitely for a program that has cost 15 billion pounds ($18.4 billion) to cover 80% of wages of some 8.5 million people. It is in place until October, although the final months will require employer input.

Even as it seeks a government loan from France, struggling carmaker Renault announced 15,000 job cuts worldwide as part of a 2 billion-euro cost-cutting plan over three years, as demand for cars has plunged around the globe.