George Floyd: Scenes from protests in Minneapolis and around the U.S. 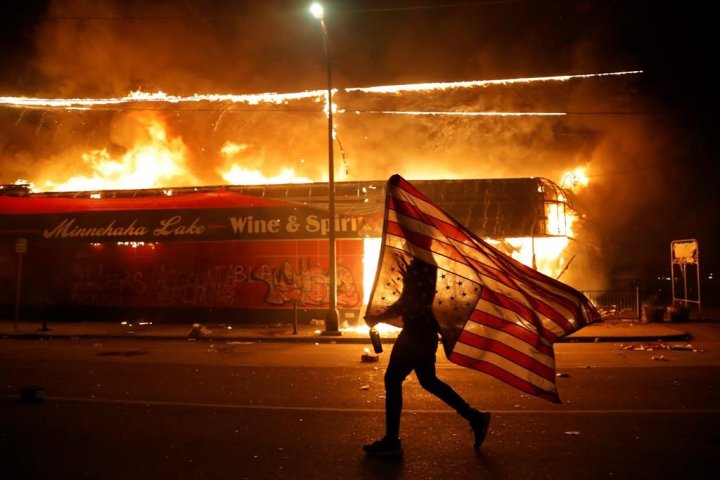 The fury over the death of an unarmed Black man in Minneapolis has thrust the city and other American cities into a state of upheaval and anger.

The protests centre around the death of George Floyd. The 46-year-old’s death was captured by a witness’s cellphone video, which shows a police officer pressing his knee into Floyd’s neck as he said: “Please, I can’t breathe.”

Floyd was accused of trying to pass counterfeit money at a corner store.

The four officers involved in his arrest were dismissed Tuesday, but that did not stifle the countrywide outrage and unrest over his death. Officer Derek Chauvin, who knelt on Floyd’s neck during the arrest, was taken into custody on Friday afternoon. He was subsequently charged with third-degree murder and manslaughter.

The epicentre of the protests so far has been the 3rd Precinct station in Minneapolis.

On Thursday, for a third night, hundreds of protesters gathered outside the building. Police officers positioned on the roof of the building used tear gas and rubber bullets to try and keep the crowds away, but eventually, the protesters attacked the building, setting it on fire.

At the mayor’s request, the police officers retreated from the station, as he said it was too dangerous for them to stay there.

Photos and videos from the precinct and surrounding area show apocalyptic scenes of burned-out liquor stores, walls plastered with graffiti and streets littered with debris.

You should also READ  U.S. will allow Chinese airlines to operate two round-trip flights per week

Several other buildings and were set ablaze and looted, including a nearby discount store that had been ransacked the night before.

The owner of a local restaurant that caught fire and was damaged in Thursday night’s outrage offered support for the protesters on Facebook.

“Your efforts won’t go unrecognized,” the Gandhi Mahal Restaurant wrote on Facebook. “Don’t worry about us, we will rebuild and we will recover.”

The New Reality: What can Canada learn from Denmark’s return to class?