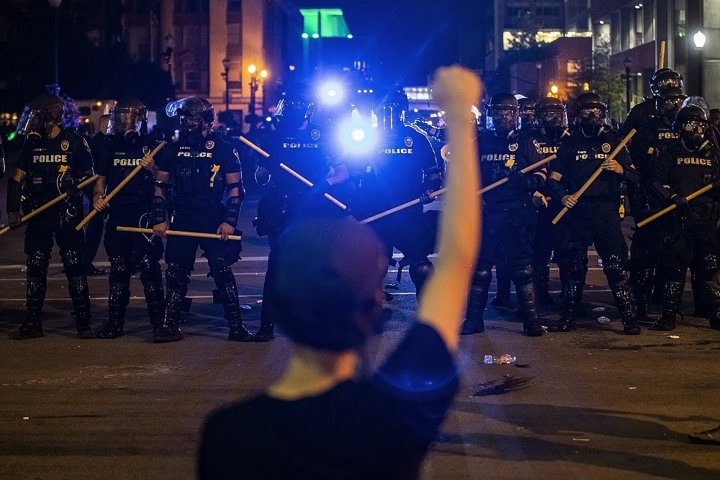 LOUISVILLE, Ky. — Looking to defuse tensions in Louisville over the fatal shooting of a Black woman by police who broke down her door, the victim’s mother on Friday called on protesters to continue demanding justice but to do it in “the right way without hurting each other.”

“No officers discharged their service weapons,” and all seven shot were civilians, police spokesman Sgt. Lamont Washington wrote in an email to The Associated Press.

In her statement, Tamika Palmer said her daughter — an emergency medical technician — devoted her life to others, and the “last thing she’d want right now is any more violence.”

“Please keep saying her name,” her statement said. “Please keep demanding justice and accountability, but let’s do it the right way without hurting each other. We can and we will make some real change here. Now is the time. Let’s make it happen, but safely.”

Beshear, speaking on CNN, said the protest started peacefully but some people later “instigated and caused some actions that turned it into something that it should not have been.”

The Democratic governor also called on President Donald Trump to retract a tweet in which he threatened to take military action to bring Minneapolis “under control.” The president, reacting to the torching of a Minneapolis police station by protesters outraged by the death of a Black man in police custody, warned that “when the looting starts, the shooting starts.”

“I hope the president will retract that statement,” Beshear said. “During these times we can condemn violence while also trying to listen, to understand, to know that there is deep frustration, rightfully so, in our country. That there has not been enough action on creating equality, of opportunity and in health care. And in a time of this COVID-19 pandemic, it’s laid bare all of that.”

Beshear added that elected officials have “a responsibility, not just to maintain the peace, which is what we ought to be doing, but to also listen, to show empathy, to try to find a way to move in the right direction, not the wrong one.”

Louisville’s mayor also called for peace as he said two of the wounded from the gunfire in his city underwent surgery while five were in good condition.

“I feel the community’s frustration, the anger, the fear, but tonight’s violence and destruction is not the way to solve it,” Louisville Mayor Greg Fischer said in a video posted to Twitter.