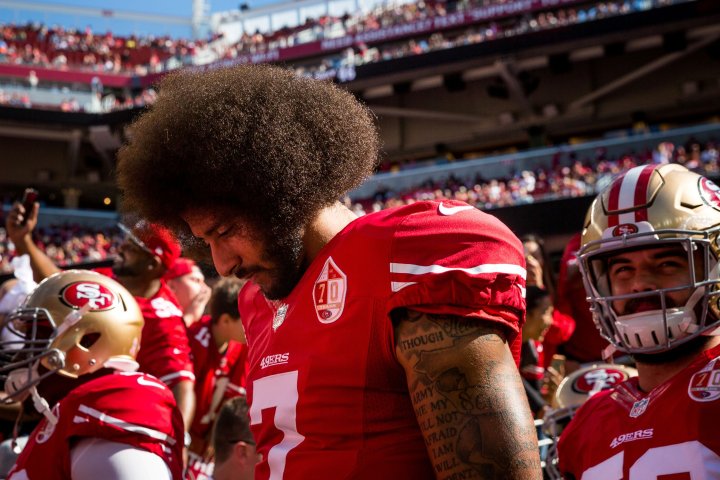 Former NFL player Colin Kaepernick has set up an initiative to help those protesting the killing of George Floyd, a 46-year-old unarmed Black man.

A white police officer is facing charges in his death, which has sparked four days of protests in cities in Minnesota and across the U.S.

Bystander video shows the officer pinning his knee into the man’s neck. Court documents indicate the officer had his knee on Floyd’s neck for eight minutes and 46 seconds, according to Reuters.

The officer, Derek Chauvin, was charged Friday with third-degree murder and manslaughter.

As protesters plan marches and rallies across the U.S. to demand accountability for Floyd’s death, Kaepernick tweeted in support of them, saying there’s “always retaliation” when one is fighting for liberation.

“We must protect our Freedom Fighters,” he tweeted on Friday. “We started a legal defense initiative to give legal representation to Freedom Fighters in Minneapolis paid for by @yourrightscamp.”

Know Your Rights Camp is a youth campaign that Kaeparnick created to raise awareness on interacting with law enforcement, with camps held in Baltimore, Atlanta, Miami, Oakland, and New York City.

“In solidarity w/ our brothers & sisters in Minneapolis, KYRC + @kaepernick7 established our Legal Defense Initiative to support Freedom Fighters on the ground,” the camp tweeted Friday.

As first reported by The Wall Street Journal and outlined on the website, the legal defence initiative has “identified and teamed up with top defense lawyers in the Minneapolis, Minnesota area to provide legal resources for those in need.”

“When there is an injustice within our community, it is our legal right to address it, by any means necessary,” the site says.