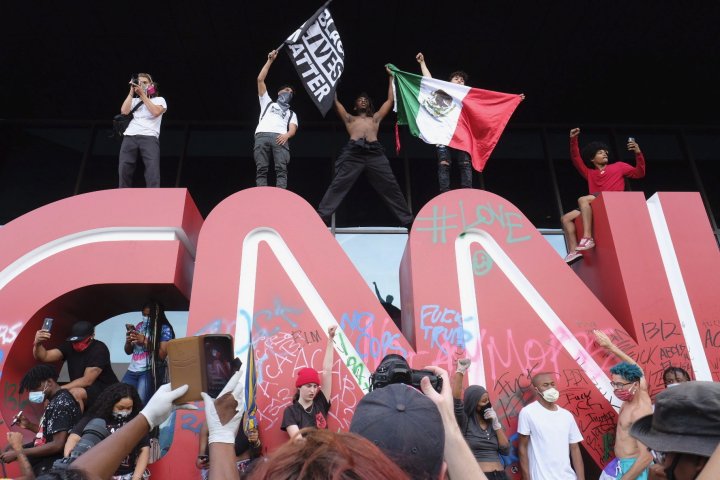 Protesters in Atlanta appeared to shove officers and throw water bottles at authorities while protesting the death of George Floyd.

Hundreds of protesters confronted police outside CNN headquarters in downtown Atlanta late in the day. Protesters threw plastic water bottles and glass bottles at police. The bottles exploded behind the police line, but no officers appeared to get hit. Protesters chanted, “Quit your jobs.”

CNN reporter Fernando Alfonso tweeted that police cars were being destroyed and glass was broken on the CNN building’s exterior.

The officers backed up in a line away from the group of protesters who were throwing objects at them.

Police ordered demonstrators to leave the street and threatened to arrest them if they did not leave quickly.

Earlier, as the protest appeared more calm, Kaity Brackett, 27, said she came out to the protest because she thinks the entire criminal justice system needs to be overhauled, starting with policing.

She said the Ahmaud Arbery killing was a catalyst for her and referred to his death as a lynching. Arbery was killed on Feb. 23 by a former district attorney investigator and his son, who were not arrested until after video emerged months later.

Brackett wore a blue mask and sat with her partner and a friend. She was less concerned about the threat from the coronavirus.

“We risk our lives going to the grocery store, going to get gas,” she said. “This is more important than all of that.”

— With files from Global News