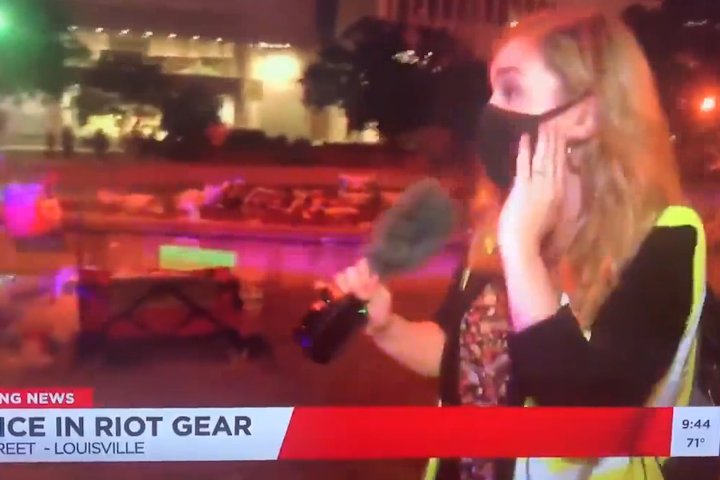 As protests over the killing of Breonna Taylor, a Black woman fatally shot by police in her apartment, continued for a second night in Louisville, Kentucky, the demonstrations once again escalated, with police clashing with protesters and journalists.

In a video which has now been shared widely on social media, local Louisville-based journalist Kaitlin Rust is seen shot by what appears to be pepper bullets while reporting live on television.

Rust, a reporter at WAVE-TV 3 News, can be heard yelling “I’ve been shot! I’ve been shot!” as the video shows a police officer aiming at the camera crew.

Asked by her colleagues who the police are aiming at, Rust is heard saying “at us, like directly at us.”

While it is unclear why police began firing at the reporter, in the video, Rust said she and her crew are behind the police line.

In a statement posted to Twitter in response to the video, the Radio Television Digital News Association said a journalist’s job is “to show the world what’s happening in our communities.”

“Local reporter @KaitlinRustWAVE keeps reporting even while being targeted by police, and viewers at home stare down the barrel of a police weapon,” the tweet reads.

On Friday, Louisville police spokeswoman Jessie Halladay apologized, saying the incident was “not something that should have occurred if she was singled out as a reporter.”

Halladay told The Courier Journal that she couldn’t tell who the officer was at this time, but that police would review the video again and “if we need to do any investigation for discipline, we will do that.”

On Thursday, seven people were shot and at least one was in critical condition after the protests erupted in Louisville.

The protests were in response to the killing of 26-year-old Taylor who was shot eight times by narcotics detectives in her own home during an early-morning raid in March.