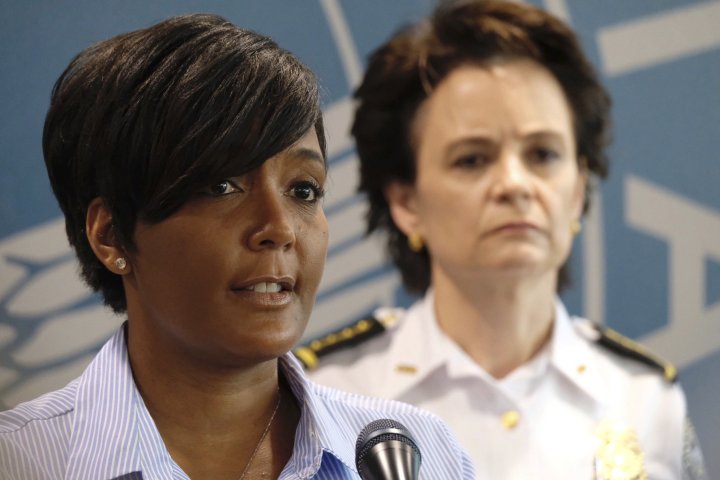 ATLANTA —  Two police officers have been fired and three others placed on desk duty over excessive use of force during a protest arrest incident, Atlanta’s mayor said Sunday.

Mayor Keisha Lance Bottoms said at a news conference that she and police Chief Erika Shields made the decision after reviewing body-camera footage of a Saturday night incident that first gained attention from video online and on local news.

The video, shown on TV as captured by local reporters, shows a group of police officers in riot gear and gas masks surround a car being driven by a man with a woman in the passenger seat. (The news footage can be viewed here. Warning — this video contains violent images. Viewer discretion is advised.)

The officers pull the woman out and appear to use a stun gun on the man. They use zip-tie handcuffs on the woman on the ground. The couple did not appear to be fighting police.

Reporters said the police had earlier broken glass on the car. A reporter said police also flattened the tires.

Bottoms said charges have been dropped against the woman, and the man has been released.

She said she’d delayed the news conference several hours to review all the body-camera footage because she and Shields wanted to be certain about what happened.

“I really wanted to believe the body-cam footage would give some larger view that could rationalize why we got to this space,” Shields said. “And having spent most of the afternoon with the mayor, viewing the footage exhaustively, I knew that I had only one option, and that was to terminate the employees.”

Bottoms has extended a curfew for another night Sunday. The governor authorized up to 3,000 National Guard troops to be deployed in cities across the state to respond if needed to protests over the deaths of George Floyd in Minnesota and Ahmaud Arbery in coastal Georgia.