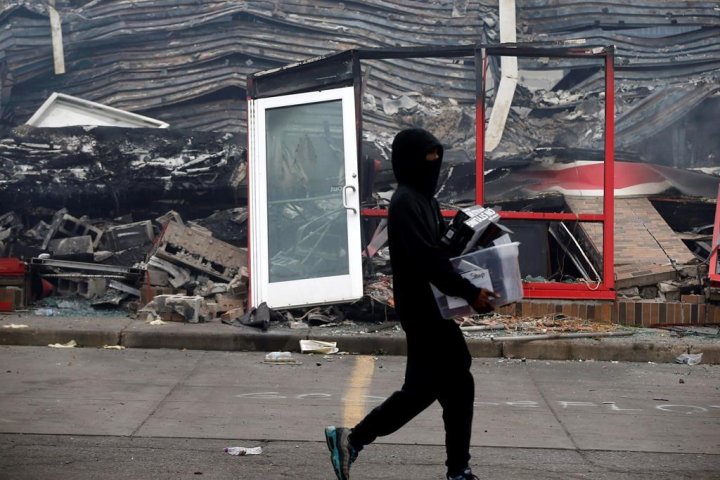 Some Canadians living in the United States are yearning for home as days of mass protests continue in many major cities across much of the U.S.

“I don’t feel unsafe but I do feel uneasy,” said Alexandra Cox, a mother of two from the Ottawa Valley.

Cox and her family moved to the U.S. in 2017 when her husband, who is a member of the Canadian Armed Forces, joined a military exchange program. Their travels brought them first to Kansas City and now to Seattle, where the couple resides with their two children.

Like many moms, Cox belongs to Facebook community groups in which many members say they’re making preparations due to the unrest.

“Their friends and family are stocking up on ammunition because they feel like things are starting to fall apart,” Cox said during a Zoom interview.

Canada is no stranger to protests. In 2010, during the G20 Summit where the heads of state and government met to discuss the world economy, riots ensued in Toronto and were held for anti-poverty and anti-capitalism. The week-long protest heated up and led to mass arrests and destruction.

“That was so un-Canadian and so it’s not what we stand for,” Cox said. “I’m aware of the mob mentality that all you need is a couple of bad apples and the message gets lost and I think that’s what’s happening around us.”

You should also READ  ‘The greatest frustration’: States desperate for supplies as COVID-19 crisis deepens

The turbulence south of the border was sparked by the death of George Floyd — a Black man who died after being pinned under the knee of a white Minneapolis police officer. It shook not only the streets of New York and Los Angeles, but dozens of smaller communities such as Fargo, North Dakota and Lincoln, Neb. The damage extended even to buildings near the White House.

“Not being used to a lot of this down here it is eye-opening for sure and sad to see a lot of the damage and the way people are kind of taking it out,” said Andrew Powell, a Canadian who recently moved from Ontario to North Carolina to be with his wife, who is a U.S. citizen.

Powell paid close attention to the rally in Toronto Saturday as protesters marched through the streets to speak out against anti-Black and anti-Indigenous racism while calling for answers to the death of Regis Korchinski-Paquet, a 29-year-old woman who fell from a balcony and died following an interaction with Toronto police. The province’s Special Investigations Unit is now investigating.

“It’s just nice to see that things stayed calm. It’s OK to protest — everybody has that right — but I think to do it in the smart way and the proper way,” added Powell.