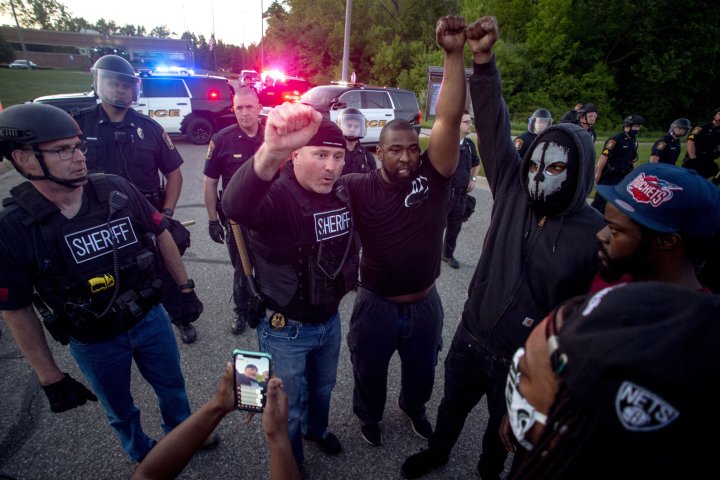 As national unrest over police brutality ravages cities across the United States, some officers are joining protesters in solidarity.

Protests in the U.S., Canada and Europe broke out after the death of George Floyd, a Black man who died at the hands of former Minneapolis police officer Derek Chauvin, who was seen kneeling on Floyd’s neck for more than eight minutes during an arrest made over possible counterfeit currency.

In New York, a woman said she suffered a concussion after a police officer pushed her woman violently and she fell onto the pavement. But in certain states, some officers have chosen a different path.

In Camden, N.J., videos surfaced of its county police Chief Joe Wysocki marching alongside protestors holding a banner that reads, “STANDING IN SOLIDARITY.”

In South Texas, police were seen handing out boxes of pizza. Police in Santa Cruz, Calif., were pictured taking a knee in a peaceful demonstration with protestors.

Outside of a North Dakota police station, photos of a white officer helping several protesters hold up a sign that says, “ONE RACE, THE HUMAN RACE”, have emerged.

And in Flint, Mich., Genesee County Sheriff Chris Swanson put his helmet and baton down to join protesters.

You should also READ  China’s coronavirus slowdown gives hope for containment in other countries, experts say

In an interview with Global News, he said Americans — specifically Black Americans — were at a “boiling point of frustration” with police, and “it’s understandable.”

When recalling Saturday’s protest, he said the crowd changed from what Swanson described as “rage and hostility” the moment he put down his weapon and began listening to the protesters.

“We have to police ourselves. We can’t turn what’s wrong into a right,” he said.