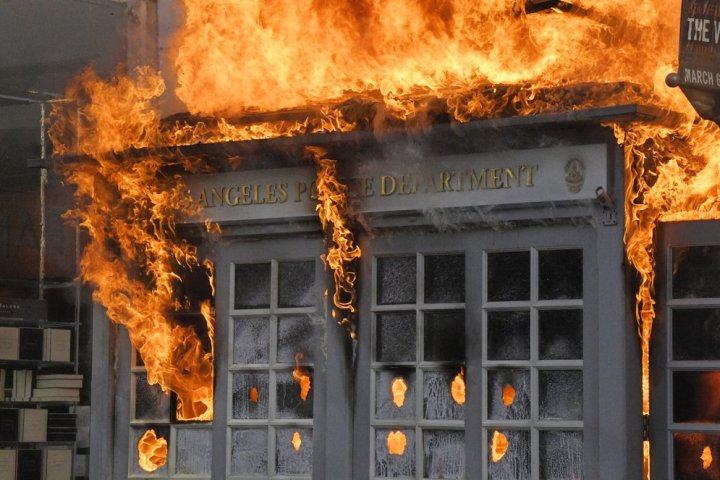 Armed National Guard soldiers patrolled the streets of Los Angeles early Sunday as the city began cleaning up after a night of violence that saw demonstrators clash repeatedly with officers, torch police vehicles and pillage businesses.

Garcetti said the Guard members who arrived early Sunday were summoned “to support our local response to maintain peace and safety on the streets of our city.”

Firefighters responded to dozens of fires, and scores of businesses were damaged. One of the hardest-hit areas was the area around the Grove, a popular high-end outdoor mall west of downtown where hundreds of protesters swarmed the area, showering police with rocks and other objects and vandalizing shops. One officer suffered a fractured skull, Los Angeles Police Chief Michel Moore said.

When the curfew took effect at 8 p.m., police moved aggressively to get people off the streets and there was no repeat of the late-night rampage that occurred downtown Friday night and led to more than 500 arrests.

Community leaders denounced the violence that has accompanied protests over the death of George Floyd, a handcuffed Black man who was died after a white Minneapolis police officer pressed his knee to Floyd’s neck.

You should also READ  In Pictures: Life in Wuhan, China right now

Protests also roiled the east San Diego suburb of La Mesa, where two banks next door to each other burned to the ground and windows and people smashed windows at many businesses including a real estate office and a popular bar.

San Diego police officers, aided by other law enforcement agencies, walked shoulder to shoulder through the streets after 2 a.m. Sunday, telling hundreds of protesters and observers that they would be arrested for unlawful assembly if they didn’t disperse.

The suburb of 60,000 people borders El Cajon, where the fatal shooting of an unarmed Black man by a police officer triggered days of major unrest in 2016.

“I think people are hurting and they’re angry and they’re trying to be heard because there’s no other way to get anyone’s attention,” Ally Kaiahua said of the property damage in La Mesa, near San Diego. “It’s unfortunate but this has been part of our history and how things get done because they don’t listen any other way.”

Kaiahua, who is white, said she was exposed to tear gas in a police attempt to disperse crowds.