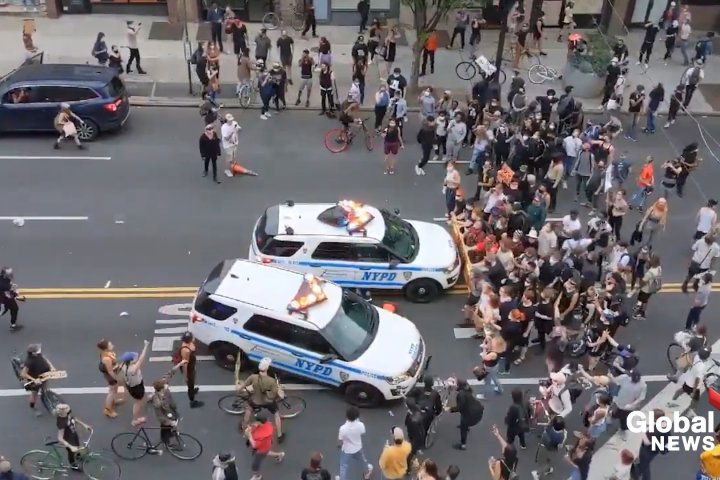 Two New York City police vehicles appear to drive into protesters gathered over the death of George Floyd, according to at least two videos posted on Twitter Saturday night.

One 25-second video, filmed looking down on the street from above, shows dozens of protesters gathered on a street, some of them behind an orange fence that separates the crowd from one NYPD vehicle.

Protesters throw a few items at the vehicle, including an orange traffic cone.

A second NYPD vehicle drives up to the right of the first vehicle, sirens on, pushing some protesters back as it drives forward.

The first NYPD vehicle then lurches forward into the orange fence, forcing people on the other side of the fence to scatter. The video shows at least one person falling down. It is unclear if anyone was injured.

The clip was viewed more than 1.5 million times within hours of being posted. Global News has emailed the NYPD for more information and will update this story if a response is received.

A follow-up video by the Twitter user shows an NYPD vehicle parked in the middle of what appears to be the same street. A person climbs onto the hood, as others appear to hit the vehicle.

A second video filmed from across the street appears to show a different vantage point of the same incident, showing the NYPD vehicle suddenly move forward into the crowd of protesters.

You should also READ  Canada to spend millions to help world’s poor amid COVID-19 pandemic: minister

Protesters angry over Floyd’s death in Minneapolis were on the streets of New York for a third straight day. Floyd, a 46-year-old Black man, was killed during an arrest on Monday.

Footage showed a white police officer pinning his knee into Floyd’s neck. Derek Chauvin was charged with third-degree murder and manslaughter on Friday.

Floyd’s death sparked four days of protests in Minnesota and cities across the U.S.