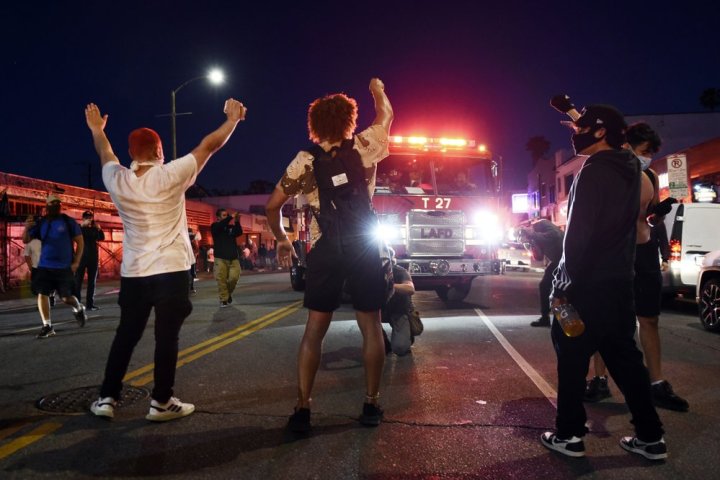 Another night of unrest in every corner of the country left charred and shattered landscapes in dozens of American cities Sunday as years of festering frustrations over the mistreatment of African Americans at the hands of police boiled over in expressions of rage met with tear gas and rubber bullets.

Cars and businesses were torched, the words “I can’t breathe” were spray-painted all over buildings, a fire in a trash bin burned near the gates of the White House, and tens of thousands marched peacefully through city streets to protest the death of George Floyd, a black man who died Monday after a white Minneapolis police officer pressed his knee on his neck until he stopped breathing.

His death is one of a litany of racial tragedies that have thrown the country into chaos amid the coronavirus pandemic that has left millions out of work and killed more than 100,000 people in the U.S., including disproportionate numbers of black people.

“We’re sick of it. The cops are out of control,” protester Olga Hall said in Washington D.C. “They’re wild. There’s just been too many dead boys.”

People set fire to police cars, threw bottles at police officers and busted windows of storefronts, carrying away TVs and other items even as some protesters urged them to stop. In Indianapolis, police were investigating multiple shootings, including one that left a person dead amid the protests — adding to deaths in Detroit and Minneapolis in recent days.

In Minneapolis, the city where the protests began, police, state troopers and National Guard members moved in soon after an 8 p.m. curfew took effect to break up protests, firing tear gas and rubber bullets to clear streets outside a police precinct and elsewhere.

At least 13 police officers were injured in Philadelphia when peaceful protests turned violent and at least four police vehicles were set on fire. In New York City, dangerous confrontations flared repeatedly as officers made arrests and cleared streets. A video showed two NYPD cruisers lurching into a crowd of demonstrators who were pushing a barricade against one of them and pelting it with objects. Several people were knocked to the ground, and it was unclear if anyone was hurt.

Few corners of America were untouched, from protesters setting fires inside Reno’s city hall, to police launching tear gas at rock-throwing demonstrators in Fargo, North Dakota. In Salt Lake City, demonstrators flipped a police car and lit it on fire. Police said six people were arrested and a police officer was injured after being struck in the head with a baseball bat. In Ferguson, Missouri, where Michael Brown Jr. was shot and killed by a white police officer in 2014, sparking a wave of protests throughout the country, mostly peaceful protests turned late Saturday and six officers hit with rocks and fireworks were injured.

Police have arrested at least 1,669 people in 22 cities since Thursday, according to a tally by The Associated Press. Nearly a third of those arrests came in Los Angeles, where the governor declared a state of emergency and ordered the National Guard to back up the city’s 10,000 police officers as dozens of fires burned across the city.

The damage in U.S. cities came as many Americans plan to return to in-person church services on Sunday for the first time in several weeks since the pandemic forced a ban on large gatherings. Pastors in pulpits across the country will likely be urging peace amid the rubble of riots.

Trump appeared to cheer on the tougher tactics Saturday night, commending the National Guard deployment in Minneapolis, declaring “No games!” and saying police in New York City “must be allowed to do their job!”