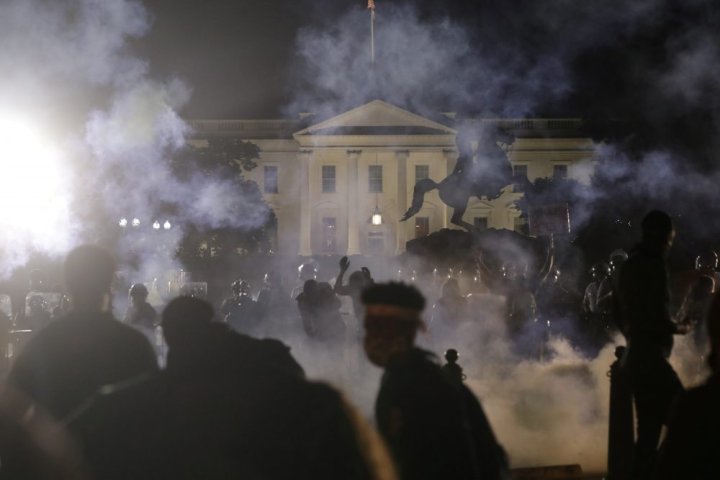 U.S. President Donald Trump bragged over the weekend that he watched “every move” the Secret Service made to protect him on Friday night while hundreds of Americans rallied outside the White House to protest his response to the death of George Floyd.

Trump described the Secret Service as “very cool” on Twitter and pushed the conspiracy theory that the protests were not legitimate.

He failed to mention that he spent nearly an hour of his Friday night in the White House’s fortified bunker in a rare security response that typically only occurs in the face of a terrorist threat. The Secret Service made the decision to whisk Trump, his wife Melania and his son, Barron, off to the bunker, the New York Times reports.

Trump’s critics responded to news of his bunker visit with outrage and mockery, particularly after Trump boasted about his defenders and ridiculed the protesters in several tweets on Saturday.

Many Twitter users accused Trump of “hiding” from the American citizens whom he’s supposed to lead through a time of crisis. They also accused him of refusing to acknowledge the anger that has spurred sweeping protests across the United States in recent days after the death of Floyd, the latest unarmed Black man to be killed in an encounter with police.

Floyd died in Minneapolis, Minn., last week after a police officer pinned him down with a knee on his neck for several minutes.

“Please, I can’t breathe,” he said in a video of the incident.

Floyd’s death came just two weeks after police barged into the home of Breonna Taylor, a Black EMT in Louisville, Ky., and shot her dead in a dispute over a search warrant. It also occurred shortly after video emerged from the February slaying of Ahmaud Arbery, a 25-year-old Black jogger who was ambushed by two white vigilantes in Georgia. The protests have also been fuelled by rage over the actions of Amy Cooper, a white woman who falsely told police that a Black birdwatcher was “threatening” her in Central Park last week.

“The country is literally falling apart and our ‘leader’ is no where to be found,” one user tweeted.

Another user called Trump a “coward” and a “bunker boy” — one of several bunker-related nicknames that circulated on Twitter Monday, along with “Bunker Don” and “Bunker Trump.”