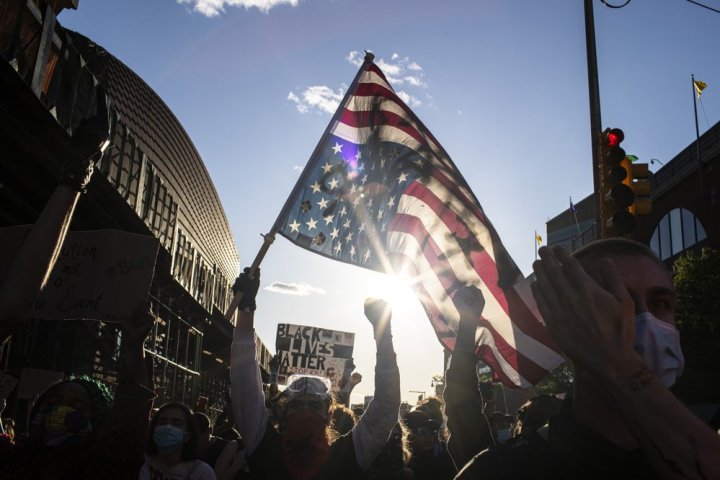 A fourth day of protests against police brutality kept New York City on edge Sunday, as thousands of people marched and many protesters and officers tried to keep the peace after days of unrest that left police cars burned and hundreds of people under arrest.

Demonstrators paraded through multiple neighbourhoods, chanting, kneeling in the street, and falling silent for a minute in front of the neon-adorned NYPD station in Times Square in honour of people killed by police.

Through most of the day, in most of the city, a tense truce held, with officers keeping their distance and occasionally dropping to a knee in a gesture of respect.

But after dark, there were ugly confrontations. Demonstrators in downtown Brooklyn and parts of Manhattan pelted officers with objects and set fires. Officers charged into crowds to clear streets, sending people sprawling and battering bystanders who couldn’t get out of the way.

Early Monday morning in Manhattan’s Soho neighbourhood, mobs of people rampaged down the sidewalks, smashing into numerous luxury shops to steal merchandise. Hundreds of people marauded through the area, breaking into Rolex, Chanel and Prada boutiques as well as clothing and electronics stores.

One person was shot amid the chaos and was being treated in an ambulance.

Small fires burned in the streets, which were covered with glass and garbage. Police appeared overwhelmed and incapable of stopping the destruction.

Earlier in the day, Mayor Bill de Blasio had rejected the idea of a curfew, like those adopted in other major U.S. cities.

The Democrat credited police for “tremendous restraint,” but appointed two city officials to review incidents caught on video, including an officer ripping a man’s mask off to spray his face with a chemical and two police cruisers lurching into a crowd of demonstrators in Brooklyn.

Since the protests began days ago, at least 790 people have been arrested, 33 officers have been injured and 27 police vehicles have been damaged or destroyed, police said. There were no major injuries reported.

The mayor’s daughter, Chiara de Blasio, 25, was among those arrested Saturday night, according to a law enforcement official who spoke on condition of anonymity because of the sensitivity of the matter.