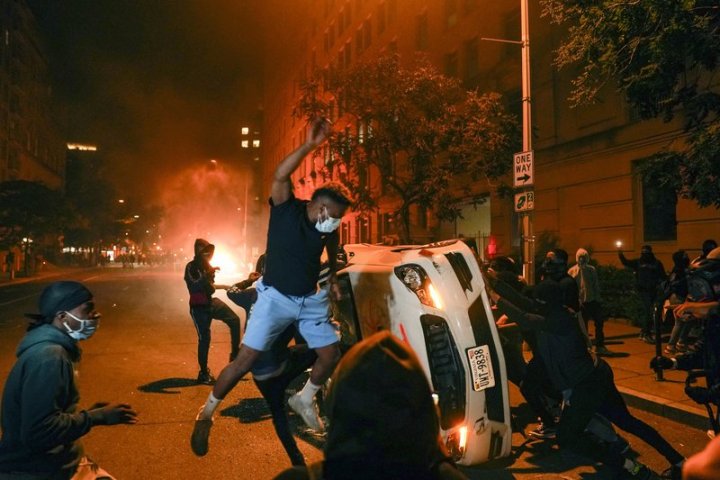 U.S. President Donald Trump has singled out Antifa in an attempt to assign blame for violence at some protests over George Floyd‘s death — but experts are raising doubts about the president’s claims.

Trump’s announcement that Antifa would be designated as a terror group came as protests over the death of Floyd — a Black man who died after a white police officer kneeled on his neck in Minneapolis, Minn. — continued across the country and turned violent in many cities, including Los Angeles and New York City.

Speaking at the Kennedy Space Center on Saturday, Trump said the memory of Floyd was being “dishonoured by rioters, looters and anarchists.”

“The violence and vandalism is being led by Antifa and other radical left-wing groups who are terrorizing the innocent, destroying jobs, hurting businesses and burning down buildings,” he said.

The title “Antifa” is short for anti-fascists. The term defines a broad group of people with far left-leaning ideologies who use a variety of tactics to combat actions or policies they deem to be fascist, homophobic, xenophobic or racist.

“It’s a kind of politics of social revolutionary self-defence against the far-right that unites various different kinds of leftists from socialists to communists to anarchists,” said Mark Bray, a history lecturer at Dartmouth College and the author of Antifa: The Anti-Fascist Handbook.

But Bray explained that Antifa is not one overarching organization and does not have a leader or a headquarters.

“It’s a kind of politics that is practised by many different autonomous groups across North America, Latin America, Europe and beyond,” he said.

While the Trump administration has repeatedly suggested Antifa is behind the riots, it is not clear how many of the group’s members are protesting or if they are actually inciting violence.

Ruth Ben-Ghiat, a professor of history at New York University who studies fascism, said at this time it’s not clear who the looters are.

George Floyd: What we know about the arrest, video and investigation