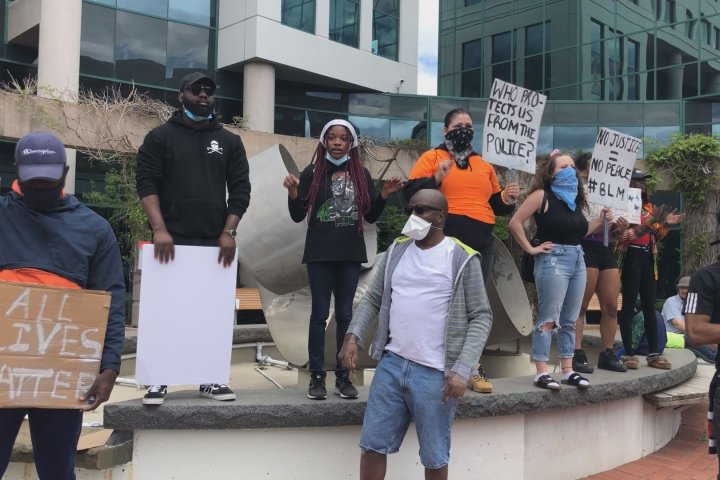 As the United States experiences nationwide protests against police brutality and racial injustice, a large crowd of people gathered for an anti-racism rally outside of Moncton City Hall on Monday.

A crowd of more than 500 people gathered at Victoria Park.

Demonstrators held a moment of silence for George Floyd, the Black man who died during an arrest in Minneapolis, Minn., after a police officer knelt on his neck for more than eight minutes.

The rally, which remained peaceful, was organized by Grade 12 high school student Nellys Kalgora, who moved to Moncton from Montreal three years ago.

She says that racism still exists in smaller cities like Moncton.

“Us people of colour, we have to speak out, we have to tell them,” Kalgora said. “We have to make people realize.”

Kalgora said that when she shops in some retail stores in the city, she is treated differently from her Caucasian friends.

“They will ask me if I am able to buy this; if not, you can leave,” she said.

“In history class, they have a small chapter about slavery, and that’s it,” she said.

Moncton mother Jennifer Leger, who is homeschooling her two sons amid the COVID-19 pandemic, said she brought them to Monday’s rally to help educate them about the protests south of the border and the wider issue of anti-Black racism.

“It is not right for people to be harassed and killed just because of their skin colour, and I want to teach them tolerance and acceptance and love for their fellow human beings,” said Leger.