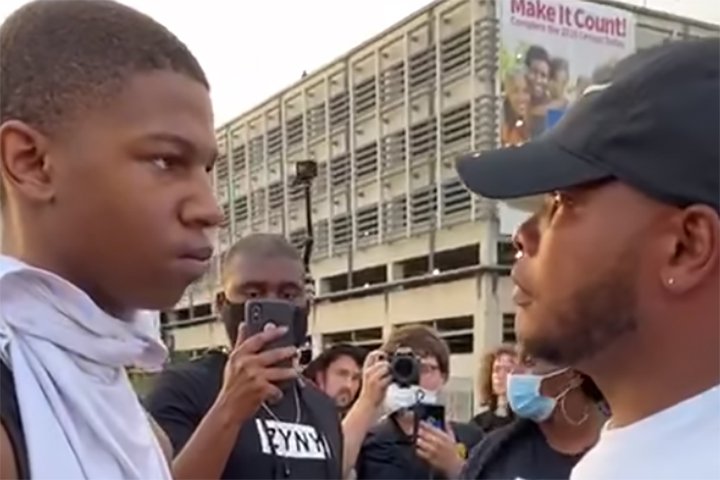 How do you make a protest count? How do you demand real change in a system stacked against you? And how do you get respect when the president keeps calling you thugs, looters and terrorists?

Those heavy questions were the backdrop for a powerful shouting match at a George Floyd protest in North Carolina on Saturday, where three generations of Black men were caught on video arguing about the right way to make their voices heard in the face of racial injustice.

“I just felt like more (Black) people needed to hear this,” a woman wrote while sharing the video on Twitter, where it has now been watched more than 21 million times.

The incident happened amid sweeping protests over the death of George Floyd, an unarmed Black man who died in Minneapolis, Minn., after a police officer knelt on his neck for several minutes. “Please, I can’t breathe,” Floyd said before he died, echoing the words of Eric Garner, another Black man who died in 2014 after police put him in a choke hold.

The viral protest video shows activist Curtis M. Hayes Jr., 31, arguing with another man, 45, about looting during a protest march on Interstate 277 in Charlotte, N.C., on May 30.

“There wasn’t really any sense of direction of how to protest, of how to get your point across,” Hayes told Global News on Sunday, after the video went viral. “I just felt there was a need to have that dialogue about ourselves.”

The powerful video shows Hayes pleading with an older man to avoid violence, before turning to a teenager and begging him to “come up with a better way, because how we’re doing it, it ain’t working.”

Hayes can be seen wearing a baseball cap in the video, while the older man, 45, is wearing a white tank top and the teenager, 16, is dressed in a black tank top with a white shirt around his neck.

The video starts with Hayes and the older man arguing loudly in the middle of the march, while dozens of people surround them in a circle with their phones out to record. Hayes tells the man that he’s 31, and the man says he’s 45.

“I’m tired of seeing this s—,” the older man says, in reference to a long string of unarmed Black people dying during encounters with police. He appears to be arguing for the march to turn violent. “We’ve been standing around as the older ones, taking this bulls—,” he continues. “Always standing around for a kumbaya. Ain’t nobody coming to protect us! We’ve gotta start our own f—ing life!”

Hayes responded by pulling in the teenager, a tall, lanky boy, and saying: “I understand, but let me tell you something right here. He’s 16!”

“What’re we gonna do?” the older man says, angrily.