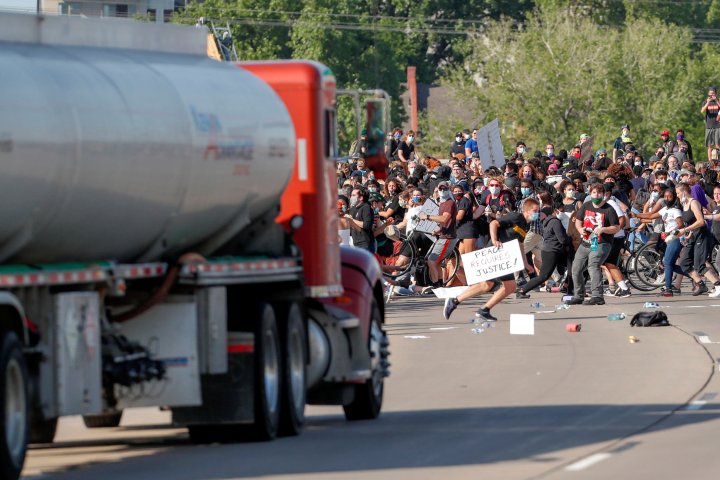 Footage out of Minnesota shows a tanker truck driving into a quickly parting crowd of thousands of people peacefully protesting the death of George Floyd. Officials say it appears no protesters were hit.

The video shows the truck moving fast along Interstate 35W Bridge in Minneapolis, the crowd scattering, before coming to a stop.

Dozens of protesters then approach the truck.

The Minnesota Department of Public Safety denounced the truck driver’s actions, saying he incited peaceful protesters and has been arrested.

“Very disturbing actions by a truck driver on I-35W, inciting a crowd of peaceful demonstrators,” the department tweeted Sunday night.

The truck driver was taken to hospital for non-life threatening injuries and is under arrest.

“It doesn’t appear any protesters were hit by the truck,” the department said in its public posts on Twitter.

Officials are trying to figure out how the truck managed to get on the highway in the first place. According to CBS News, the highway had shut down to vehicles just 40 minutes earlier.

Harrington told both CBS News and Fox9 News that the truck was already on the highway as officers moved to shut it down.

“It was one of the most dangerous things I’ve ever seen,” public safety commissioner John Harrington told CBS News.