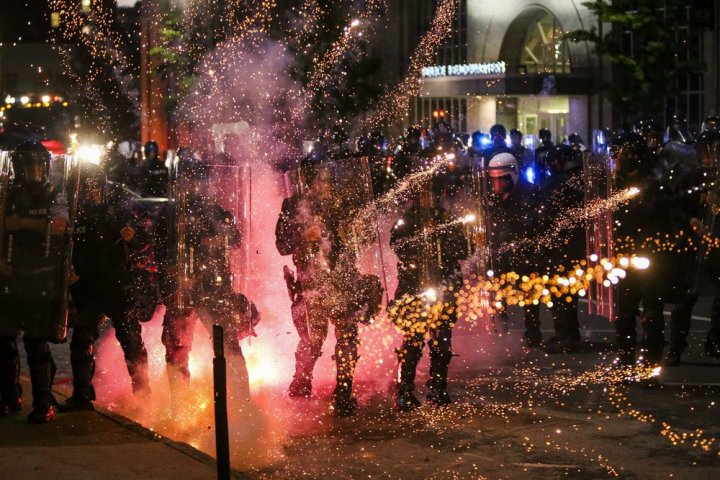 Police say four officers were hit by gunfire after protests in St. Louis that started peacefully Monday became violent overnight, with demonstrators smashing windows and stealing items from businesses and fires burning in the downtown area.

The police department tweeted early Tuesday that the officers were taken to a hospital with injuries that were not believed to be life-threatening. It was unclear who had fired the shots.

The chaos in St. Louis followed continued protests Monday in Missouri over the death of George Floyd and police treatment of African Americans, with gatherings also held in Kansas City and Jefferson City.

But later Monday, protesters gathered in front of police headquarters, where officers fired tear gas. Some protesters smashed windows at a downtown 7-11 store and stole items from inside before the building was set on fire.

The protests joined dozens across the U.S. that have escalated since the May 25 death in Minneapolis of Floyd, a handcuffed Black man who pleaded for air as a white police officer pressed a knee on his neck.

The now-former officer seen on video with his knee on Floyd’s neck, Derek Chauvin, has been charged with manslaughter and third-degree murder. Three other officers involved in Floyd’s arrest have also been fired, but activists are calling for them to be charged as well.

You should also READ  8 dead in Philippine plane crash: reports