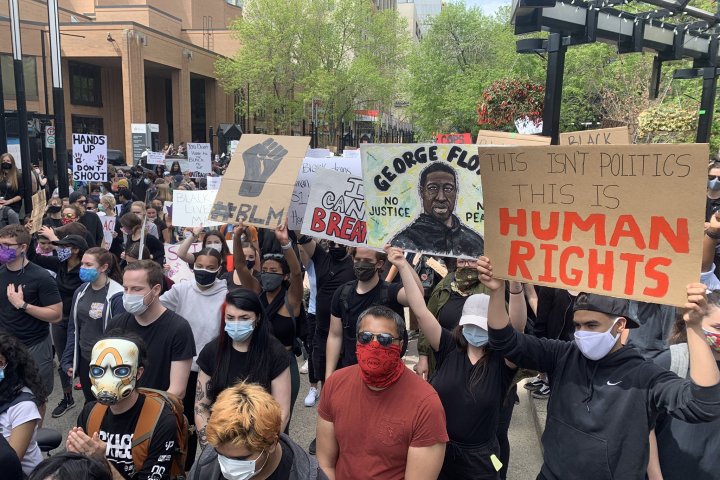 After a weekend of pain and unrest across America, leaders in Alberta were speaking out against racism Monday.

“I denounce racism in any form and police brutality anywhere it occurs and we need to acknowledge that we are not perfect in Canada,” Premier Jason Kenney said when asked about his thoughts on protests across the United States.

“We always need to strive to do better in ensuring equality of all before the law.”

The issue was discussed during Question Period Monday when Opposition Leader Rachel Notley called on the government to reverse a November cut to a grant aimed at ending racism.

“I think it’s just important for Edmontonians to know that their city council and their leaders feel that pain as well and need to hear that pain and be reminded of it in these situations and recommit to our work to end racism.”

Iveson said he would be speaking at the next Edmonton Police Commission meeting about what can be done to further that work.

Advocates told Global News the words from leaders were appreciated but that more action needed to be taken.

Nigel Williams, with The National Black Coalition of Canada Edmonton and the director of Community Engagement with Melanistic Magazine, said acknowledging racism exists in Alberta is an important first step.

You should also READ  Venezuela could soon be swallowed in South America’s coronavirus wave, experts warn

Williams says it is something he has dealt with since he was 10 years old.

“The culture and Black culture — whether it’s the music, the food, the fashion … It has spanned the globe. People have copied and mimicked and accepted.

He explained racism tends to be more subtle in Alberta with comments between friends or Black people being denied for loans or bank accounts despite being qualified.