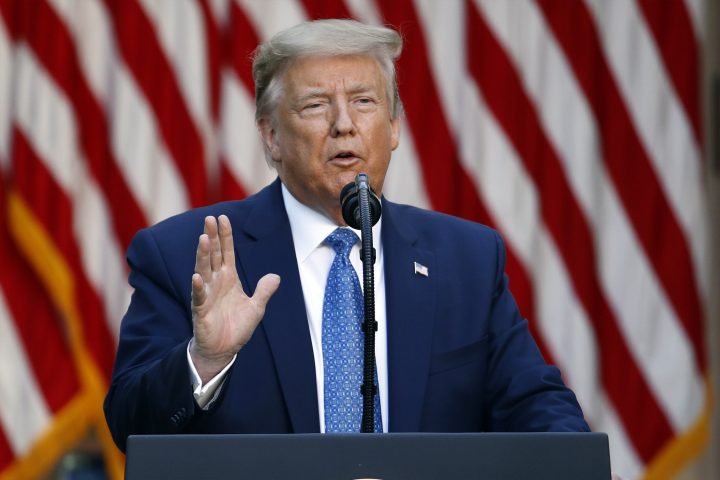 Trump, who said the measures go into effect immediately, has yet to actually deploy the American military to any states as of yet.

Whether he can do so legally as a means to quell protests and whether such demonstrations constitute acts of terrorism, however, also remains to be seen.

During his address, Trump urged mayors and governors to establish an “overwhelming law enforcement presence until the violence has been quelled.”

“A number of state and local governments have failed to take necessary action to safeguard their residents,” he said.

“If a city or state refuses to take the actions that are necessary to defend the life and property of their residents, then I will deploy the United States military and quickly solve the problem for them.”

Trump said his administration was already in the process of dispatching “thousands and thousands of heavily armed soldiers, military personnel and law enforcement officers” to put an end to the protests.

He added that a 7 p.m. curfew would be “strictly enforced” within Washington as well, promising lengthy jail sentences and severe criminal penalties for anyone caught breaking the law.

According to The Associated Press, between 600 and 800 National Guard members from five states were now being sent to assist the U.S. capital, citing senior defence officials.

You should also READ  Venezuela could soon be swallowed in South America’s coronavirus wave, experts warn

Trump also criticized Antifa, lumping the left-leaning, anti-fascist movement together with other “organizers of this terror” he claimed were “leading investigators” of the violence unfolding across the U.S.

On Sunday, Trump declared that he would be classifying Antifa as a terrorist organization.

Currently, the U.S. does not have any laws in place to designate domestic groups as a terrorist entities — only foreign organizations could be classified as such.