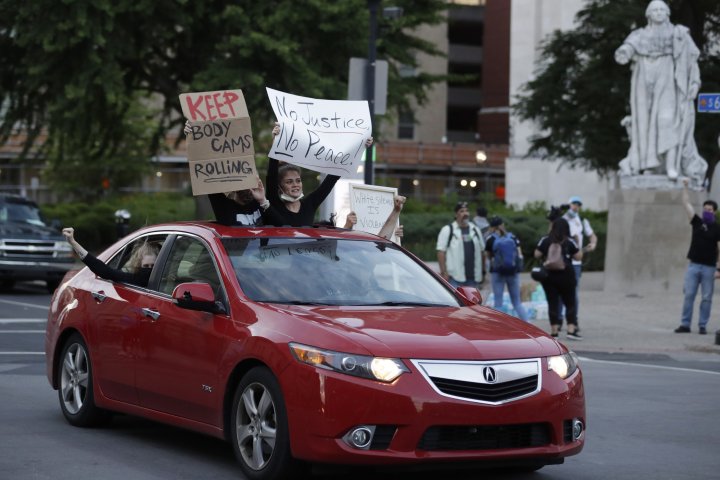 Louisville’s police chief was fired Monday after the mayor learned that officers involved in a shooting that killed the popular owner of a barbecue spot failed to activate body cameras during the chaotic scene. A huge group marched hours later to the spot in a peaceful protest.

David McAtee, known for offering meals to police officers, died early Monday while police officers and National Guard soldiers were enforcing a curfew amid waves of protests over a previous police shooting in Kentucky’s largest city. Police said they were responding to gunfire from a crowd.

Later Monday evening, the massive group stretching for several blocks marched a couple of miles (kilometers) from downtown to the site where McAtee, who is Black, was killed just hours earlier. As the protesters passed, some motorists put their fists in the air and honked in solidarity with the marchers.

“This type of institutional failure will not be tolerated,” Fischer said. “Accordingly, I have relieved Steve Conrad of his duties as chief of Louisville Metro Police Department.”

“This is the entire reason that we have those cameras,” the Democratic governor said at the state Capitol in Frankfort. “And every other officers’ cameras should be reviewed, and if they captured any part of the scene it ought to be released.”

You should also READ  Super Tuesday: What happens to the votes for candidates who drop out?

Beshear authorized state police to independently investigate the shooting. He pledged the probe will be conducted in an “honest and transparent way that will not take months.”

U.S. Attorney Russell Coleman announced that federal authorities will be part of the investigation.

“We understand this community’s need for answers and we will assess all the information, and will take any appropriate action that is warranted by the facts and the law.” Coleman’s office said.

The governor said he had counted on body camera footage to help determine “the truth in a way that spoke for itself, at a time when trust is difficult and people deserve to be able to see and evaluate.”