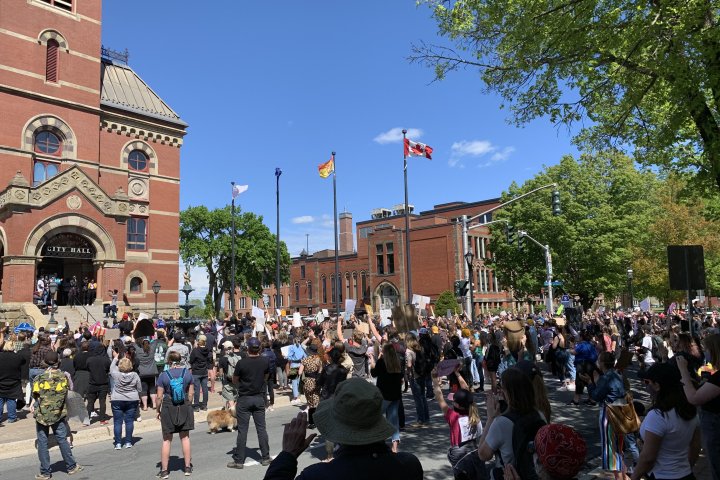 Thousands turned out for a march in Fredericton on Tuesday to protest the death of George Floyd.

“Considering the legacy of slavery and segregation where Black people have been degraded throughout time and quite frankly treated like animals, it’s time that we stand up and make it known that our lives matter too,” said Husoni Raymond, one of the organizers of the march.

In the United States, protesters have marched night and day to condemn Floyd’s death in Minneapolis. The outrage over the killing of the unarmed black man has now spread, with demonstration in cities across North America and Europe.

“If it’s a white male or a white female that gets hurt in any way, shape or form, it’s dealt with immediately,” said one protester. “But if it’s a Black, well, there’s more to the story, let’s investigate. ”

Frederectionians marched in support of Black Lives Matter and to condemn the killing of Floyd.

“We are tired of being treated like we don’t belong,” said peaceful protester Herve Vunda.

“I’m protesting because I don’t know if I’m next but I hope for the best,” said another protester.

Alysha Jalbert made a sign with the names of people of colour that have been victims of police brutality in Canada.

“A lot of people think this is a states issue and Canada is perfect and doesn’t have any of those horrible crimes but it does happen,” said Jalbert.

The peaceful protesters say they want justice for the Floyd family, and for all officers involved in the Floyd case, to be arrested.

“We want to continue this dialogue so the main idea today was just to give Frederectionians the idea that things like this happen here too so if we are not careful a tragedy like this might hit home,” said Yusuf Shire, president of the New Brunswick African Association.