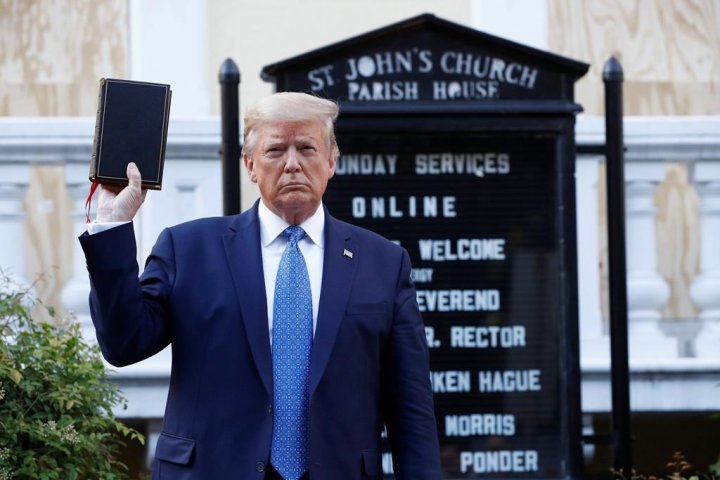 After promising to deploy the U.S. military against protesters angry over the killing of unarmed Black people, President Donald Trump made his way to a historic Washington, D.C., church for a photo op where he held up a Bible and posed with members of his administration.

But moments before Trump’s journey to St. John’s Church, which lies right across Pennsylvania Avenue from the White House, police cleared a crowd of largely peaceful protesters using tear gas and other means of force — prompting outrage from religious leaders and politicians.

Trump visited the church a day after a small fire caused damage to its basement during ongoing protests over the death of George Floyd while in police custody on May 25, which have spread from Minneapolis across the country and beyond.

The president held up a Bible and posed for photos at the front entrance with Attorney General Bill Barr, Defence Secretary Mark Esper and other administration officials, all of them white.

He did not go inside the church, instead returning to the White House without further mention of Floyd or the protests.

“We have a great country,” Trump said as he posed for photos. “Greatest country in the world.”

The Associated Press reported that just before Trump’s remarks in the Rose Garden, a mass of law enforcement, including U.S. Secret Service agents, Park Police and National Guardsmen, began advancing toward the protesters in Lafayette Park as many held up their hands, saying, “Don’t shoot.”

Soon, law enforcement officers were aggressively forcing the protesters back, firing tear gas and deploying flash bangs into the crowd to disperse them.

The sounds of exploding canisters could be heard while Trump spoke of law and order, declaring himself “an ally of all peaceful protesters” before demanding that governors across the nation deploy the National Guard “in sufficient numbers that we dominate the streets.”

Trump concluded his remarks by saying he was leaving “to pay my respects to a very, very special place.”

Despite rarely attending church, Trump has prayed at St. John’s, as all sitting presidents have for decades.