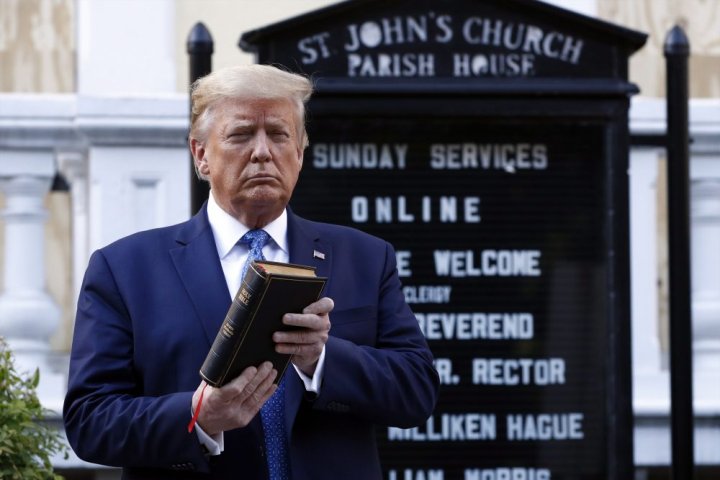 Claiming he is backed by a “silent majority,” President Donald Trump turned the nation’s capital into a model for the overwhelming force he believes critical to stop sometimes-violent protests that have spread across the country in a time of racial unrest. His tactics were decried Tuesday by some fellow Republicans as well as his presumptive Democratic opponent.

The violent dispersal of peaceful protests near the White House the night before was a potent symbol of Trump’s policing tactics and a physical manifestation of the rhetorical culture war he has stoked since before he was elected. Moments after historic Lafayette Park was cleared, Trump walked across to pose with a Bible in front of a church damaged by fire during protests the previous evening.

“D.C. had no problems last night. Many arrests. Great job done by all. Overwhelming force. Domination,” Trump tweeted Tuesday, after a night in which heavily armed military forces and federal officers swarmed the city. Trump added: “(thank you President Trump!).”

The president wanted to make the aggressive action in the nation’s capital — where he wields disproportionate powers — an example for the rest of the country, a senior White House official said Tuesday, speaking on condition of anonymity because the official was not authorized to discuss internal thinking. Trump hoped his personal walk to the church, after federal officials dispersed protesters, would send a message about how dominant force could restore law and order.

The president has threatened that if states do not take tough enough action, he will deploy active duty military across the country to quell unrest in the wake of the death of George Floyd in Minneapolis.

“SILENT MAJORITY!” Trump tweeted Tuesday, embracing a phrase popularized by President Richard Nixon decades ago, in claiming broad support for his actions. Trump also emphasized the political importance of the moment to his supporters on Twitter and declared that “My Admin has done more for the Black Community than any President since Abraham Lincoln.”

The District of Columbia’s federal status gives the president outsized authority to act, allowing him to direct the deployment of the National Guard. He authorized Attorney General William Barr to oversee a surge in the deployment of federal law enforcement officers, including the FBI’s Hostage Rescue Team and agents from the Drug Enforcement Agency.

Defence Secretary Mark Esper and Gen. Mark Milley, the chairman of the Joint Chiefs of Staff, sought to distance themselves from Monday night’s events after former military officials criticized their appearance with the president.

Senior defence officials told reporters the two were not aware that the Park Police and law enforcement had made a decision to clear the square or that Trump intended to visit the church. They had been in Washington to co-ordinate with federal law enforcement officials but were diverted to the White House to brief Trump on military preparations, the officials said.

Former Vice-President Joe Biden, the presumptive Democratic presidential nominee, said of Trump posing for photos holding up a Bible: “I just wish he opened it once in a while.”

And D.C. Mayor Muriel Bowser said of the routing of the protesters, “At no time do we think it was appropriate that people who had not violated the curfew or anything else received that treatment.”

Democrats weren’t the only ones saying Trump had gone too far.